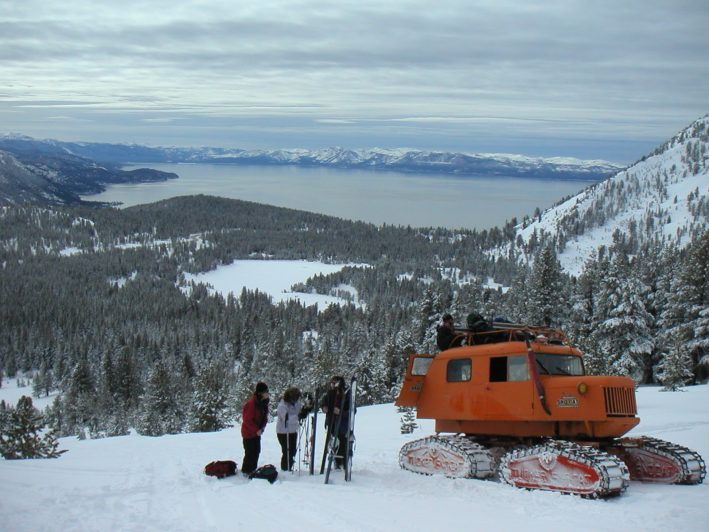 April 1, 2010 (Tahoe, CA) — I received a call from Tom to go out in his 1955 Tucker Sno-Cat for some backcountry skiing after an impressive late season Sierra dump. Yes, you heard me right—he has a personal ’55 Tucker and takes it on sporadic backcountry missions when conditions allow. A mid-sized machine, uphill is often accomplished via rope tow on the back—one shotgun seat and the dogs ride in the back. He finished with, “Bring one of your buddies if you want”. This opened the door for me to do one of my favorite things: expose a friend to something completely out of his element. So I invited my old college roommate and current Marketing guru, Lee.

Lee is in his forties and has only skied for the past two seasons. He had never been in the backcountry, but with today’s techie equipment I thought he could handle it. During our beacon talk he was astonished, stating “I thought you turned those things on when you were buried to call the Ski Patrol for help?” He was equally amazed at the fact that dogs tag along to slash some pow with their owners.

First run I lined him up on a nice mellow line with a foot of blower, told him to stay balanced, and turned him loose. Watching him link turns next to the Tucker as it churned down the hill made me giggle as I thought what must be going through HIS mind right now. I don’t have kids but it felt like I just took off the training wheels and my kid was riding down the street for the first time. Needless to say Lee was out of his mind, and at day’s end proclaimed it as one of his best days. At the car he reached out to shake my hand and pulled me in for the surprise man-hug: mission accomplished.