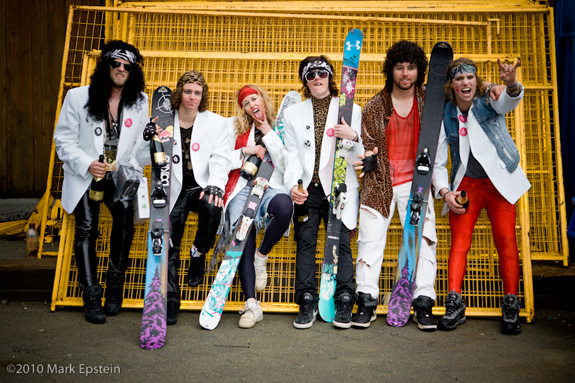 Sometimes great things happen in the rain. Exhibit A: The 2010 Orage Masters.

On the heels of a 2009 competition that saw less than perfect weather, it seemed like spring might make an appearance while driving up to Whistler on a warm Friday afternoon, but by Saturday, the day of the contest, the clouds moved in. This, however, didn’t seem to matter—the spectators showed up at the contest’s new location next to the GLC, the athlete’s scaffolding filled to capacity, and teams from K2, Salomon, Armada, 4frnt, Line, Volkl, Surface and Amplid showed up early and ready to throw down.

With the course set up adjacent Whistler Village, the features, ranging from a big spine to numerous jib options and a top of the course table, stood up to soupy conditions. It didn’t take long for athletes to start chucking laid out front flips over the spine, and mix in spin and flip rotations off the cannon box front and center to the judges table.

The judges table may have been the only reminder that it was a contest—with costumes overflowing from the competitors to just about everyone in sight, it felt more like a rocker/matador/mime/hippy/ninja turtle/mario bros/crab fisherman-themed gathering of the tribe, featuring soggy smiles and a healthy dose of raucous behavior, including, but not limited to, flaming hair, T and A and a flying squirrel doing…a flying squirrel.

In the end, K2 ran the gauntlet of head to head team versus team action and emerged victorious over 4frnt in the finals, in large part due to their skiing, but I’m guessing it may have also had something to do with over the top sketch comedy—indeed, it was a total-package kind of show from start to finish, with slapstick humor filling any gaps between skiers on course.

Once again, Orage and company proved that you don’t need corporate sponsorship, timed runs and hour-long holds on course to put on a wildly entertaining and progressive contest. Heck, you don’t even need sun—just some snow, costumes, and the company of a shared stoke for skiing made the Masters one of the best contests of the year.

Thanks to Mike Nick and the Orage crew, Whistler-Blackcomb, competitors and fans for showing up and kicking off the World Ski and Snowboard Festival in style.