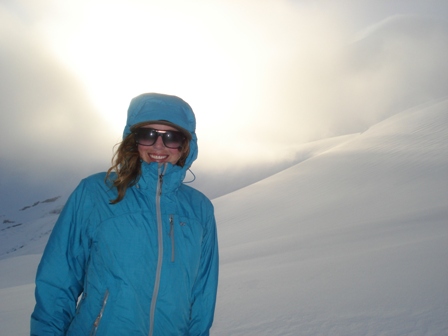 After a week of new snow in May, we decided to go for the summit of Mt. Baker. Here is our story:

Six hours to the top. One o’clock in the morning my eyes open, regretfully. Within the hour sandwiches are made, mostly peanut butter and jelly. Bags are packed; shovel, probe, extra gloves, water, sunglasses, pom-pom hat, goggles, camera, sunscreen, and an extra layer. A headlamp sits on my Smith flat bill a little crooked, but still functional. The four of us pile in the car and this time the dog gets left behind. He is confused because we don’t normally wake up this early to go skiing, so he doesn’t really care when we shut the door. Driving to the trailhead is bumpy; I remember these potholes–we had talked about them being “a definite day wrecker” when previously riding road bikes down the same pavement. Some kind of reggae plays in the background, or maybe not, maybe I just want to remember it that way. It doesn’t really matter. It is 2:30 in the morning and we had only slept four hours.

At the trailhead we follow standard procedure: boots on (at least I always put my boots on first to get the most difficult part out of the way), skis out of the Rocket Box, skins on skis, decide who will carry the rope, the one ice ax, the extra weight for the group. I volunteer for at least the ice ax since I don’t today have the unnecessary weight of my Alpine Trekkers (which are, just like the potholes, potential “day wreckers”). Also, since I am in constant competition with these boys to be the most unreasonable, I request to take more weight. No one objects and we are off.

We skin up the road, past a few other cars. It is a Saturday and there will undoubtedly be working professionals up from Seattle on the mountain. We, a crew of four all with Marker Dukes, guess that they will probably have Dynafits; another constant competition, the one between those with Dukes and “fat” skis and those with light, smaller, technical gear. Well, maybe it is not a competition, but the skiers involved always take notice. “Geez, those are huge skis. Are you really going to need those for the way down?” or more notably from our side, “The reason you skin is so you can slay powder on the way down. What is the point with skinny skis?” I don’t know who is more unreasonable. You decide.

In the trees, about half-way to our clearing, at about 3:30 am, one of us experiences equipment failure. It doesn’t come as a surprise. It is the one of us who is well over six feet tall and weighs 250 pounds. Ski companies just don’t make equipment to handle individuals with basketball star stature, which makes sense because I don’t know many skiers who are six feet, five inches tall. Matt Squatch (not his actual name, but not just a pseudonym for the story) takes his broken gear and all Sasquatch-like proportions of himself back to the car promising that he will be back around 10:00 to pick us up, just in time to get us to the wedding later in the afternoon.

It is now 4:30 a.m. and we still have awhile before we make it out of the trees. This time it is easier because we can follow the skin track we made just one day before when attempting the summit. Just one day before when we had left a little too late and decided to ski powder before the sun came out and cooked it like baked lasagna, making the top layers conform and clump like a thick, chunky tomato sauce. We follow the skin track, stepping over logs, watching for snags, trampling over thick bushes, just like anyone would when the snow hasn’t fallen at low elevations during a Pacific Northwest winter. It takes a lot of snow to cover up these woods.

We make it to the clearing and our systems kick into auto-pilot. Once again, following our old skin track makes this easier. He charges ahead like he always does and I spend a lot of my time wondering what it is about him that allows movement on skins to be so hastened. His speed and my wondering benefit the group because it contributes to the overall swiftness of the mission. In my wonderment (a state that coincides with competitiveness), my pace increases, and I refuse to stop for lengthy breaks. Therefore, we keep going, now just the three of us, and the summit seems close.

Living in Glacier, Washington, at 800 feet above sea level, you ascend nearly 10,000 feet to reach the summit of Mt. Baker. We do this in just under six hours. I don’t know much about climbing mountains, and the closest I have ever been to altitude sickness is reading “Into Thin Air”, but when we start to slow, one of us complains of an upset stomach, and none of us really feel like eating, I would imagine something like altitude sickness is involved. Oh well, Glacier is our base camp and Baker is the highest peak around here; any other missions should be less taxing in this regard. Plus, we are so close. And the group of Seattelites with Dynafits is just behind us. We take a quick break, force a bite or two of one of those PB & J’s down our throats, and keep moving.

The Roman Headwall accounts for 1,000 feet of the ascent and takes just as long to get up as the last 2,000 feet before the Headwall. As our skis break through the wind slab, which is disconcerting in the first place, we can see the unconsolidated grauple underneath. One step, two steps, three steps, stop. Each of us follows this pattern for a majority of the Headwall.

Unfortunately, among the items packed, none included a football, Frisbee, or any item you may use in a flat, open space the size of a football field. The top of Mt. Baker is just this; a snowy, slightly slanted, football field, with a steaming, sulfur smelling crater next to it, the only reminder that we are on a volcano. The Dynafit crew come up right behind us and sit down just far enough away that conversation would require yelling. We take a few photos, compile an interview for the helmet cam, take off our skins, and step into our Dukes, happy to have the minimal extra weight because now we are skiing–nearly 8,000 vertical feet back to the car. Just before we take off, an unnamed Dynafit female asks us to take the group’s photo. They are exceptionally nice people, but disappointedly fit the stereotype. “Wow, those are huge skis. You guys must have known there was powder up here.”

We are back in the woods. We were on the summit 15 short minutes ago. Just less than six hours up, and 15 minutes get you back. Running the proverbial film lapse through your mind, you wonder if you ever really made it to the top. Six hours of packing, gear breaking, wonderment, hiking, sweating, self-induced competition, picture taking, snow assessment, altitude sickness, and a lack of a Frisbee, and you are back at where you started. Your skis moving from edge to edge, transferring your weight and energy from side to side, as you descend a glaciated mountain that will undoubtedly be there longer than the span of multiple skiers lives, and the events of the last six hours are gone. Six hours gone in 15 minutes.

I didn’t end up going to the wedding. I was just too tired and my brain too confused; much more confused than the dog this morning when we woke up to go skiing at one o’clock. I lost the battle in unreasonableness this time, but it doesn’t matter. Any accomplishments for the day are a bonus when you have already climbed a mountain.