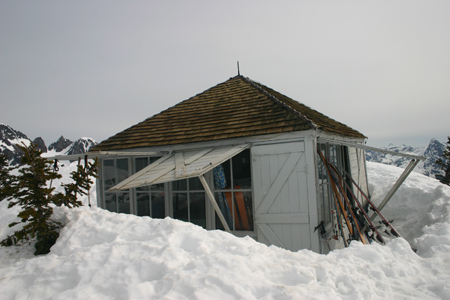 The Winchester fire look-out cabin was built in 1935 and is now maintained by the Mount Baker Club. Located at 6,521 feet, just above Twin Lakes, the cabin can be accessed from Twin Lakes road off the Mt. Baker highway. More crowded in the summer, the look-out is perfect for skiers.

We made the same assumption at the trailhead. When the road is seven miles long and you can only drive two, most people turn around. But, our group, along with the couple anticipating a romantic weekend in the mountains, still made it to Winchester Cabin last weekend. Our assumption and the ensuing reality was far less disappointing for us than to the couple who lay cozy in their bed as we trampled in as night fell. The only male in our group arrived first, and with two females following, the couple probably thanked whomever they thank in these kinds of situations. We could have been two more late twenties boys with a whiskey bottle anticipating a late night of drinking. Instead we cooked a scrumptious curry, a testament to our devastation of the produce aisle and our insanely heavy packs, rolled out our sleeping bags, and said, “Buenos noches.” The cabin built in 1935 and maintained since 1982 by the Mount Baker Club, warmly welcomed our tired bodies.

Speculation at the trailhead regarding our arrival time sounded a little like this: “Its noon now, we will certainly be there by five o’clock.” The sun sets around 8:00 this time of the year and as I said we arrived at night fall. Eight hours, not five.

Our objective, Larrabee Mountain, would have taken an assumed six hours to summit, so when we woke up the next morning as the sun rose somewhere behind The Pickets, we knew it was too late to try. Instead, the day consisted of juggling snowballs, taking naps, and watching an array of huge wet slides take place in every direction. The cabin provides books, one bed, plenty of cooking equipment, and unmatchable views; enough to keep any group of unsuccessful spring skiers satisfied.

Which brings me to this point: spring skiing offers no solace to the lazy. Just when your ski boots start to feel more foreign than flip flops and your skin sees a little sun exposure, just when reading a book for the afternoon trumps multiple laps on your favorite chair at your home ski area, and just when your schedule relieves you from constant skiing, this is when you must be motivated. Melting snow rarely allows for sluggishness. Into May and June, solar intensity quickly transcends the idea that the ski day begins around 9:00 a.m., especially if that ski day consists of a lengthy, steep descent with exposure. Therefore, grandiose goals in the spring demand pre-dawn starts. We never made this happen.

Aside from the pitiful non-attempt to summit Larrabee, our eight hour effort skinning, then walking on dirt roads, skinning again, then walking, compensated our group in unanticipated ways. After the defeated couple left Winchester the next morning, we put up the “No Vacancy” sign and the three of us enjoyed all the perks of a private cabin in the mountains; sunsets, sunrises, avalanche spectating, reading, cooking, talking, Uno playing, and mountain gawking. Sometimes ski trips just work without the skiing.

We had to get back to the car, so some skiing occured.

Thanks to Holly Walker for all the photos.