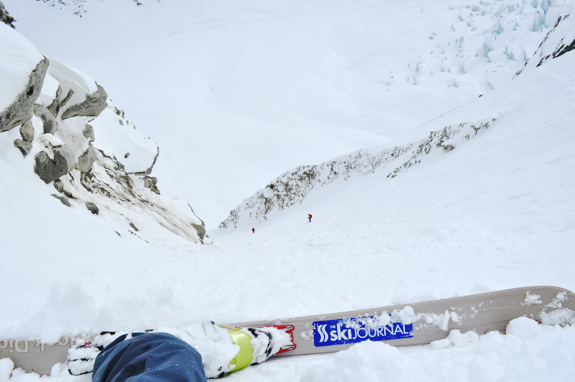 …Needless to say, the gear didn’t arrive… From Milan Malpensa, we had only two certainties, as thus: 1- We had a hotel room in Chamonix, and 2- The prospect of street meat in a European ski town always sent shivers down Zip-Loc’s spine. Okay. Trains. The direct shot that we had scheduled earlier was a distant memory, as day’s end fragmented the inter-Alpine train scheduling. Italian trains- not so great. But the view was ever improving. Lago Majore out the window. Vistas closing in… breathe deep. The Alps. Swiss trains. Wonderful Swiss trains. On time, clean, and consistent. Chevalier once told me that you could set your watch to a Swiss train. Chevalier was right. Several trains later we were dumped in the pleasant Swiss town of Brig. Keith had sent a cab driver from Chamonix over the pass to Switzerland to hijack our crew into France. A trip that would have taken a sane man 2 hours and a mountain regular 1 hour took this former Frenchy ski guide just over 35 minutes. Brilliant. Chamonix. Even non-French speakers know to avoid pronunciation of the X. Everyone sounds cool saying Chamonix.

A famous pose is plagiarized. Blizzard is on our minds. As Chevalier noted, “this will be the culmination of all of our ski-film highlights.” Still pushing against the wall of jet-lag, we hit the streets in search of jambon and fromage. The glue that holds the Alpine soul together. Cheese and meat and bread. Repeat. No one could mistakenly see stars tonight… something up high was blowing. After the concoction known as Tarteflette was ingested, it was home to bed for an early rise of gear rental for Red Ryan and Zip-Loc. Chamonix.

The encounter with the ticket office didn’t go well. The internacional behind the window could not wrap her brain around why Red and Zip-Loc would return to Milan, then back to Chamonix tonight…

Riding on the Aiguille Du Midi tram will stir the most hardened of skiing souls. The combination trams ascent 9000 vertical feet. For a Colorado kid like myself, that is the equivalent of sending a ski lift from Denver to the top of Long’s Peak, vertically. Or from Boulder to the top of Bear Peak three times. There is not a lift attained experience in the Western hemisphere that matches it. Or any of the hemispheres, for that matter. The Tram is one of the true religous icons of our sport, regardless of your feelings on ski lifts. Not to mention that when you disembark, you step smack into the opening scenes of the greatest ski films of all time. What shrines of skiing match up to the Aiguille? The Strief downhill course. Alf’s High Rustler. The tram at Jackson. Even the twice-bombed telepherique at La Grave pales in vertical to the Aiguille tram. It stands alone.

Drawing Plake’s ire in the Edge Of Never outtake interviews was the number of Alta stickers in Chamonix… and in all of the shrines. Alta stickers on the Aiguille Telepherique. Alta stickers on the warning sign for the Valle Blanche. Alta stickers at the summit station of Grands Motets. The Gospel According To Plake is canon that I hold near and dear… somehow Glen is able to wrap his brain around all 360 degrees of skiing’s past, present, and future, and from this generate an opinion that is dead on. Or at least in line with skiing’s true heart. But I disagree with respect to the Alta stickers. I appreciate that they may represent ugly Americans bagging on Chamonix. The truth, however, is that anyone who has been to Alta to earn their sticker, and subsequently makes the trek to the Alps, knows damn well that the Aiguille routes dominate Baldy the way that Redwoods tower over Aspens. The Aspen gazes on the Redwood with respect, yet holds its own beauty. The stickers are left as penance, as artifactual offerings from a regional Cathedral on the steps of the Basilica, the high altar of skiing. They each represent a different yet vital core of the spirit of skiing, interacting to fuel the magic of our sport. Powder symbiosis.

The bootpack. Chevalier has been fearing the worst. Garvey even relates that a woman had just weeks earlier slipped off of the track and landed- barely- in a crevasse, preventing her from launching over the N. Face of the Midi. All told the crowds were non-existent, as the base was reporting high winds and minimal visibility. Still reeling from the high of stepping off of the telepherique, we made quick and esthetic work of the arete. The hype generated with regards to Le Valle are all well-earned. The terrain is huge. Words cannot relate the extent of huge. Even a front row seat courtesy of Keith’s guidance on the Grand Envers variation leaves little doubt that the hugeness of the coming week will make the very recollection wince in its lack of stature.

The most important, most consequential and moving of experiences in my own life, are often lost in the amnesiac of adrenaline and poignancy. Wedding day? Lost. I looked back up at the rusty tower astride the Aiguille Du Midi, realizing I had already lost the fine detail of the snow tunnel, the platform, the Poubelle, the boot pack. The long check-list of ski lore ticks in my own life was in danger of losing its top objectives in a big hurry. Fortunately I cling to a doctrine that has been born more of personal stubbornness than insight; Skiing is like Life. The more that I experience, the less I realize that I know. You can’t forget the Aiguille station until you have passed, in a state of adolescent bliss through its midsts; only then will it be added to the non-memories of your life’s top-10. In this way I was again re-born into a child-like fascination with all that helps to make skiing so precious and meaningful to me. A long prelude has been spelled out… now begins a new chapter.

A powder day on the Vallee Blanche? Madness.

Keith explains the legend of the Chouca birds representing the spirits of the dead mountaineers, and we are unfazed due to Red Ryan’s relaying that his sister wants us to keep our eyes open for frozen cave men, “and other artifacts. You know- shit frozen in the glaciers that is finally resurfacing.”

After a hike and train ride out of the Mer De Glace, Zip-Loc and Red were making the trek back to Milan Malpensa, this time without the kryptonite known as Chevalier. The trip that he understatedly described as “Denver to Vail” would take them the rest of the evening. Thankfully, snow remained on the Midi, and Keith wanted some more. Fromage and beer, and back to the Aiguille Du Midi for round two. This time we unloaded at the mid-station to begin a skin beneath the North Face of the Aiguille for a miraculously untouched powder stash called the Plan Du Midi… and with a view. How does this terrain, so close to the tram, remain untouched? Too much hugeness, too few people on an Easter Sunday’s Eve spent in the highest of churches.

But as it can tend to do when covering 9000 vertical feet, the snow gave way to goat paths and trees. Spring hiking, in AT boots. We emerged adjacent to the Chamonix ski jump, and passed through the hippie parking lot lurking behind the telepherique station. Gap years done huge. Acres of combi vans and the un-heralded heroes of skiing nonsense. To spend a winter living for free in a Chamonix parking lot is subject for a different day, a different life then, aye brother?

Chevalier and I made quick work of the Euro crowd hot tub, then Roclette fromage mania on the town. Red and Zip-Loc returned with the remainder of their gear, and it was a snowy, optimistic romp through the streets of Chamonix, preparing for the superunknown, the pending start to the Haute Route, starting with Les Grands Motets. Jambon, Fromage, beer, repeat, bed. Chevalier’s mantra rings strong tonight as we are pounded with snow even some 9000 feet below our objective: “All we need is a foot.”

All we need is a foot. A quiet night will soon make way for Glory, alpine back-country style. And the bags had arrived.

I love it when a plan comes together.