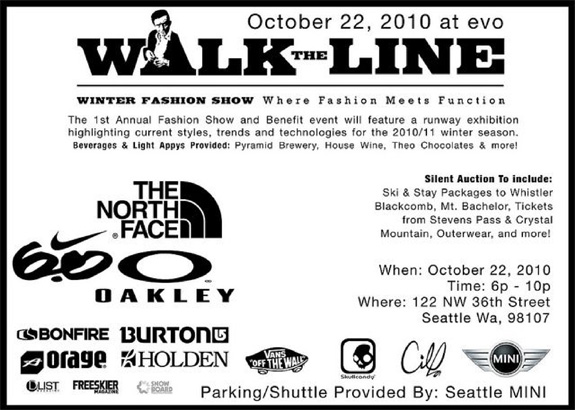 Seattle, WA (October 20, 2010) – This Friday, October 20, Evo in Seattle is holding a snow-themed fashion show to benefit Protect Our Winters. Entitled “Walk the Line”, the event is themed around the styling of the original punk rocker Johnny Cash, but is intended to show off the new trend to involve a bit of fashion in the world of highly functional outerwear—basically the idea that something can be technical without adhering to the tight-fitting and earth-toned backcountry suit stereotype.

With appearances by Gretchen Bleiler and Kelly Clark and emcee’d by Rob Kingwill, it is largely an industry-focused event, but according the official press release, “This event is for everyone, even if you can’t be here for the evening we encourage you to participate. There will be a live Twitter feed during the show featuring commentary and imagery! You are encouraged to Tweet alongside the broadcast and let us know if you like what you’re seeing while your feedback going to be shared with the world…

“Proceeds from the evening will go to Protect Our Winters (POW). Donations will be accepted at the door as well there will be a silent auction featuring Ski Destination packages from Crystal Mountain, Stevens Pass, Mt Bachelor and Whistler Blackcomb. Each include lift tickets, outerwear kits and select items from participating sponsors. There will be drinks, light appetizers, desserts, beats by DJ Sean Cee and parking/shuttle provided by Seattle MINI.”

So take your physical or virtual self down to Evo this Friday and get your fashion on for a good cause.