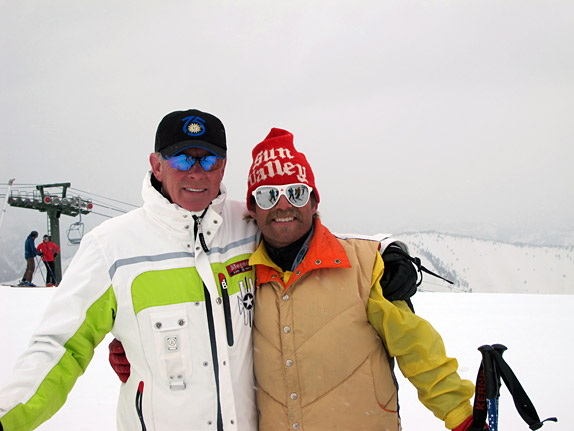 While Sun Valley itself can be one of the most classic experiences in all of skiing, add figures like Wayne Wong, Bobby Burns, Glen Plake, Suzy Chaffee, Daron Rahlves, Zach Crist, Charlie McWilliams, Pat Bauman, Jim Stelling, Jim Garrison, and you have a multi-generational who’s who of American freestyle and freeskiing. Billed as “Ski Heritage Week” Sun Valley was celebrating it’s 75th while the International Ski Hall of Fame was inducting several of our culture’s greatest figures: 60’s/70’s Olympian and World Cup standout Bobby Cochran, Sun Valley proprietor Earl Holding, downhill racer extraordinaire Daron Rahlves, Olympic and World Cup para-skier Muffy Davis, the Man himself Glen Plake, and an emotional acceptance by Sherry McConkey on behalf of her late husband Shane—all worthy recipients, honored in a dinner ceremony in the classic halls of Challenger Lodge.

Arriving Thurs evening, we quickly made our way to Whiskey Jacques, one of the most infamous bars on the SV-Jackson-Aspen-Stowe level circuit. With a K2-sponsored “T-shirt” contest harkening back to their original notable event, 40+ years ago in the nearby Boiler Room, the ladies took the stage with the first contestant holding nothing back and going totally freestyle off the bat, if you know what I mean. Others displayed moderately greater restraint and one highlight was the 70+ year old woman, apparently a former 60s/70s era Skiing Magazine fashion editor who got up, cane in hand and got down for the crowd with veteran funk moves. I believe she took second. I have no idea who won. We did; upstairs in the VIP zones where some sort of K2 bowling/beer pong game was going down and cocktails flowed. With Smith also behind the event, Tag, Cory Smith, Gabe and Co. made sure the good times rolled, and roll they did until closing time. Even legendary alpine snowboarder Jim Zellers was there, as he came up to show his support for the McConkey family.

Fri offered some prime SV spring conditions with Doreen from First Ascent and media lurkers from Powder, Freeskier, TSKJ and others including foodphile magazine Savuer (pronounced, as I now have been told, like “cat fur”). The thing about Sun Valley is that for a long while—when every overly-testeroned skier in the country thought they needed to traverse avalanche terrain to a skin track to a series of deadly exposures, in order to validate themselves as a skier – it got a bad rap as a bunch of featureless cut runs. Now that the freedogging bug is back with increased emphasis on halfpipes, parks, and fall-line ripping, Sun Valley is looking better and better to a new generation. There is certainly something electric and transformative about getting off at the top of Baldy and laying down a 4,000 foot unbroken, high-speed groove to the bottom of Warm Springs. One of the greatest stokers in all of skiing, and should be a top-ten on any skier’s bucket list. And, there’s plenty of epic backcountry for those seeking, nearby. Dinner Fri was at the Hemingway Trail Creek Cabin. The entire time I lived in Ketchum (1996-2000) I never ate there once because I figured it was too expensive and for tourists. As it turns out the fixed price menu is entirely reasonably and the food was top notch. Austrian sweater-jacket optional. Do hit the Trail Creek Cabin dinner if you get a chance, another classic for a reason.

Sat brought slightly inclement weather with high winds shutting down the Roundhouse Gondola and several chairs for a short while, but cleared shortly enough for TSKJ Creative Director Jessie Lu to get a personal ballet skiing lesson with freestyle legend Suzy “Chapstick” Chaffee. Quickly bonding over energy healing, yoga and other Taos-related subjects, the two whisked off to find Atlantis on River Run. As Suzy and Jessie Lu held hands in a tandem routine and sang sun salutations, the sun, of course, came out. While other media types later scooted off to a thermal springs mission near Frenchman’s, Jessie Lu and I gathered on the lawn in front of the ice rink for an epic group photo featuring an incredible cross-section of the greatest freestyle skiers and associates since the end of the Freestyle World Pro Tour back in the day. Basically everyone who was anyone, and is still above ground, was there.

The final evening’s presentation dinner in the Limelight Room was a historic occasion with moving moments and comments from all. From Glen Plake’s reminding the 500+ crowd to support local ski areas as well as large resorts; to Muffy Davis’s touching thanks to parents, coaches and the entire SV community; to Carol Holding accepting on behalf of her wheelchair bound husband Earl and earnestly thanking all the SV employees; to Daron Rahlves reminding all that being an exceptional husband and father is every bit as important as winning downhills; to Bobby Cochran’s soft spoken gratitude in finally joining many of the rest of his legendary family in the ISHF; to the final Medals of Recognition handed out the large gathering of original hot doggers—the event simply represented the best of skiing.

Many, many thanks to Sun Valley for an incredible week, and specifically to Jack Sibach, Greg Randolph, Candace Pate, Doreen Jarman, and Steve Metcalf for putting together such an amazing event. Like Warren Miller says, it’s still the greatest place to be a skier. And if people like the Crist Bros, the Caldwells, and the up and comers on Andy Gilbert’s SVSEF program are indication, the future looks only brighter and brighter for Sun Valley.