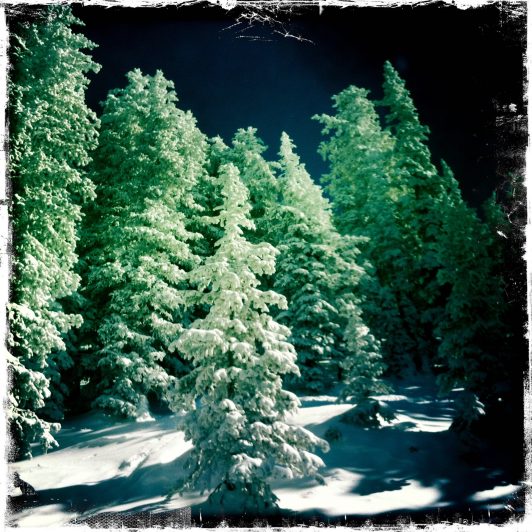 For a state starved for powder, the news hit like some unreal flash-bulb-memory-to-be; who played this cruel joke, and why would they dare toy with our emotions like this?

The number, however, was real. 27 inches. An epic day by most standards. Maybe not the biggest dump in recent memory, but nonetheless a jolt to our collective systems. The report was confirmed. 27 inches. Powder locusts hell-bent on tracking down the season’s storms would spend the agonizing remaining weekdays debating this number versus the value of the drive. Front rangers knew that ski-country people would have already digested the goods and would sit by idly, quick to point our their plunder to anyone who would listen. “You just drove up from DENVER? Too bad you weren’t here on Monday. Hell, even yesterday the snow seemed somehow… deeper.” And then, mountain-town taunter might gaze into the distance as if recalling some memory that existed only as a dream in the disheartened mind of the commuter. They might shake their head. “27 inches.”

We, however, possessed an unbelievable trump card in the form of a plot hatched by the Double-Haul king François The spot was Steamboat. The snow was plentiful. And we were signed up on the expert Snow Cat through the superlative Steamboat Powdercats.

Powder skiing is in itself an elitist venture. Not socially elitist, but more the calling of those who have felt the heart of skiing’s stoke. Equal parts daydream, surfing, and flying, the lure of deep snow is one whose source cannot be fully described. Nor should it be. But we, the hopeless devotees, will often conform our lives around the search.

Access to untracked powder has become the holy grail of backcountry exploits, dating in the American West to the early days of skiing the Wasatch. For decades, motorized travel as a means of access has trumped the Alpine touring equipment popular in Europe and pre-chairlift America. In recent years, blanket marketing of back-country equipment has facilitated the assimilation of the masses into the previously untrod powder fields in our own back yards.

But 2011-2012 has been a different animal, with avalanche danger cresting new levels of nonsense, a wholly alien instability sending shocks of cold feet through even the most fearless seekers of stoke. With several deaths both in and out of bounds, the alpine has been a trigger-happy slab-fest resting precariously on a bedrock of granulated sugar. Not to speak ill of those who have been caught up in a snowy torrent, but the majority of skiers well-versed in what constitutes the fine line between “it’ll go!” and “it’ll slide!” have been hunkering down, biding their time before the spring consolidation, making little offerings to the beta-gods at CAIC.

Back to Francois. The congregation of self-proclaimed Team Awesome was met with tales of big snows by the advanced party. Hype was growing as our loose band of misfits made their way over the ice-rink known as post-storm Rabbit Ears Pass, descending on a valley blanketed in the sum total of four feet of new snow. Plankers Kitty Kat, Alber and Uncle Larry would be offset by the pin-heads Hoosier and The Hippie. The alpiners had a strong representation in the form of Francois, DelMo, Dr. Seuss, Gordo, Gearhead, Wolverine and Izzy. The sun broke and we boarded a Cat known simply as Felix, bound for the steeper pistes lying between Buffalo Pass and the Mt. Zirkel Wilderness.

Backcountry Ethics tend to vary with geography and time, and the cat operation in Steamboat has earned its stripes operating in the Buffalo Pass area since 1983. While skiing in Routt County has had a storied history whose origins crystallized around the Norwegian Carl Howelsen and his origination of the town’s first winter carnival in 1914, the majority of skiing that helped to make the Yampa Valley famous has happened in-bounds. The terrain south of Mt. Zirkel Wilderness, itself ripe with the valley’s namesake “champagne powder,” has grown up over the past 30 years as a result of Steamboat Powdercats. Like it or not, AT skiers and sled-necks defer to the area’s grand-daddy. When the code is followed, a symbiotic relationships ensues: the cats pack down access roads for their clients, and the sleds follow suit once they are sure that the terrain is skiable.

Our first run is met with ubiquitous wide eyes as steep tree-slopes of untracked goods remain, now over a day beyond the end of the storm. The disbelief is quickly shattered by the reality of powder snow at out finger-tips. Our mixed band storms the line, seemingly unable to farm esthetic lines, hell-bent on the pleasure at hand. One line follows another, and it is immediately apparent that we are going to spend an entire day without crossing another track. Lactic acid gets a quick reprieve on each cat ascent, but there is no time for love lost, and each successive run exceeds the expectations laid down by the previous.

It isn’t hard to beat the drum for an operation like Steamboat Powdercats, and at least one member of Team Awesome pipes up with what the expert guides hear time and time again, the declaration of “best day ever.” If it’s not the company or the terrain or the snow or the experience of being personally shuttled to yet another track-less vista, then the day is enhanced by the route selection debated by our guides, like the track list of a mix CD, each run an attempt to lead the rider to a new emotional plateau. Guides Pete Scully, Alison Givnish and Matt Weingartner are subdued in their handling of our stoke, well aware that the terrain remains loaded, and that the recent dump could set up hazards not seen thus far this season.

Rather than tell you what the Powdercat guides ARE, it is easier to tell you what they are NOT. Between Scully, Alison and Matt, we were treated to a trio of personalities who continually ensured that the experience would be about our party. After a brief and matter-of-fact safety lecture by Den-Mother Alison, not another mention was made as to who-knows-more, and the amped up hyperbole that often accompanies groups of skiers on big days. The guides let us ski, facilitating fun and esthetic lines, to the point where the progression of each fall line seemed natural; although serving as guides, they know the terrain well enough to search out the spots that they would likely ride even in our absence.

The day’s end was met with wind out of the west, helping to remove any unwanted skin carelessly left exposed to the elements. More weather moving in. Even as the day looked to be winding down, the trusty Felix found its way to a final tree line shielded from the gales by virtue of its north-eastern aspect. Our crew retired in a daze to a night of steak-frites and the heroic tales that tend to accompany the aftermath of a day spent wallowing in fresh champagne. By the time we checked out of the Tugboat, tired from a day’s skiing and having just danced The Robot at hyper-speed, the day had already been cemented in our collective lore. Fire-side exaggeration aside, Francois’ timing was flawless; aided and abetted by Steamboat Powdercats and our trio of Scully, Matt and Ali.

Ski where you will, the limit of the experience limited only by the horizons to which you dare to dream; but during a season in which the backcountry is better left punted, don’t be afraid to find your way to the Yampa valley; whatever drive-to-fun ratio you thought that you were comfortable with, I assure you that it is wrong. Team Awesome will meet you there.

**Carl Howelsen source is A History of Skiing in Colorado by Abbot Fay, 2000