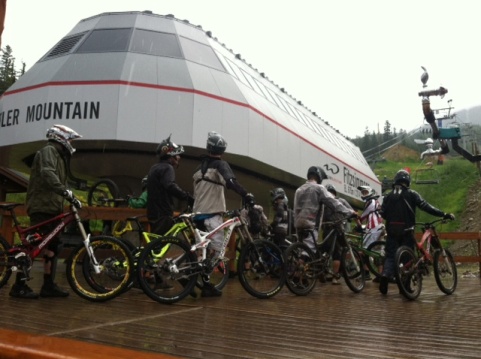 It’s no question that Whistler-Blackcomb, probably the world’s most archetypal ski town, is a great place to ski. But as good the skiing is, when the mountain shuts for the summer, knobby tires and fresh dirt take over at Whistler’s bike park—possibly the greatest place for lift-accessed mountain biking in the world.

Before July 14, though, I had never experienced the berms and earthen booters of trails like Black Velvet, Ninja Cougar, Angry Pirate, Fatcrobat, and probably the most famous bike trail around, A-Line. With two weeks of PNW sun as motivation, myself and a crew of stateside Pacific Northwesterners headed north to spend the weekend camping and riding bikes. It’s amazing the crossover between skiing and mountain biking, and the opportunity to make some two-wheeled turns where I had taken pow turns this winter was an exciting one.

Saturday, the warm weather continued, nearing the 90s and leading to a sudden explosion of tank tops. Taking our first run down the Blue Velvet/Black Velvet trails, I was instantly impressed—they were as flowy and smooth as their names suggested. We continued to explore, spending the day riding everything from pump tracks to ladders to jump lines, enjoying the new Giant Glory rental bikes from the G1 rental shop. As were to be expected on a sunny weekend, the lines in the morning were long, but by the time the midday heat really kicked in the crowds disappeared for the day.

I understand the physics of dropping a 30-foot cliff on skis—pow is soft, and tomahawking usually results in a retrieval bootpack and jeers and taunting in the lodge. Dirt and rocks are not soft. I relearned this at the top of the Freight Train, when—after feeling like a hero all morning on perfectly-manicured jumps—I crashed into some rocks and spent the next 10 minutes trying to convince my shredded, Charlie-horsed leg to stop spasming. Luckily a beer is a great (albeit temporary) cure for physical injury, and our group mellowed out with a few jugs at the Garibaldi Lift Co., trying to comprehend the physics of the massive features in the Joystick Bike Park for CrankWorx August 10 through the 19.

Inevitably, as is standard in the PNW, the rain clouds moved in on Sunday, putting mud in the potholes and grease on the wooden features. The lifts kept spinning though, and die-hard rippers and tourists alike kept a steady flow on the trails and an entertaining show in the air above the jump lines. Muddy, tired and bruised, we decided to call it in the afternoon and head south to the States.

Thanks to Chris McLeod and Peter Lonergan from Whistler-Blackcomb for the hospitality and a first taste of the legendary bike park—broken or not, we will be back!