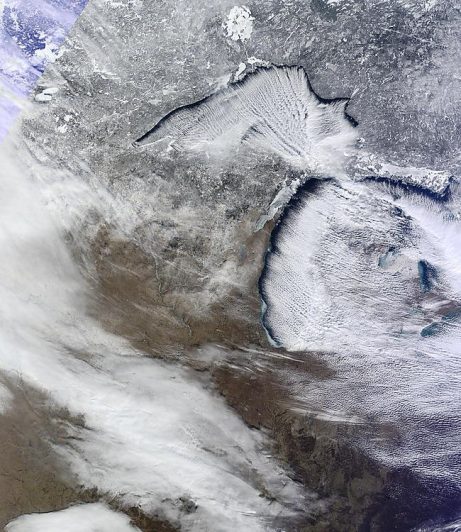 Consider that that snow is hardly touched — or even known about — by most of the Midwest (or, obviously, the rest of the country). In fact, most of that snow fell on mining ghost towns or otherwise small ‘villages’ — most of which are borderline municipalities without so much as a post office. The entire Keweenaw Peninsula, after all, is home to only 2,200 year-round residents over an area of just under 6,000 square miles, a relic of the Upper Peninsula’s boom and bust copper and iron mining history that brought hundreds of thousands immigrants here in the 1800’s, but today remains largely vacant in the winter months.

Yet when snow falls in the Keweenaw and across the rest of the U.P., the pilgrimage begins.

The two-and-a-half-hour drive from Marquette, the U.P.’s largest city and my home for the past four years, to Mount Bohemia — the undeniable mecca of Midwest powder, and the only resort with a triple black diamond — is usually worth braving the inevitability of getting stuck behind plow trucks on sketchy U.P. roads. And yet it’s not unusual to meet people in Bohemia’s base yurts that drove five-plus hours from Green Bay, Wisconsin or others that traveled between seven and 10 hours from below the Mackinaw Bridge. I’ve even met families in the bar yurt (one of six yurts at Bohemia’s base) that had traveled 14 hours from southern Michigan for a chance at Bohemia’s unspoiled lake effect.

For a peninsula that is characterized by the Scandinavian heritage — brought by immigrants in the 19th and 20th centuries that came for mining jobs and a climate similar to home — this amount of lake effect is nothing new. However, when the atmospheric temperatures above Superior align just right and we get pounded with five feet of fresh before the Christmas tree even comes down, it’s kind of a big deal. (See my previous whine-fest about getting no snowfall before Christmas here.)

The reality, though, is that the Keweenaw Peninsula (and Michigan in general) was dealt a royal flush in the geological poker of North America’s precambrian formation, and as an enormous arm of land jutting directly into the middle of Lake Superior, the Keweenaw is annually hit with around 340 inches of lake effect. And no where else in the United States rivals the Upper Peninsula in terms of lake effect snowfall; New York receives its fair share off Lake Ontario and Lake Erie, but it hardly amounts to the 300-plus inches that the U.P. annually sees.

Yet most aren’t familiar with the Keweenaw Peninsula, much less Mount Bohemia, which recently got its 15-minutes of fame with a final four draw in Powder Magazine’s Ski Town Throwdown bracket, taking first in the “Big East” region and ultimately confusing/angering everyone that’s ever been/lived/skied on the East Coast. The nod seemingly earned Bohemia a distinction as a “legitimate” skiing destination — a distinction that most in the region have realized for years — and yet online commenters delivered low blows on the basis of Bohemia’s location in Michigan. Considering that most imagine Michigan as a flatland, interstate-laden, post-apocalyptic relic of the auto-industry’s past (or just an extension of Ohio), I can imagine why everyone is being so tough on the ‘ole Great Lakes State. I mean, I’ve personally experienced multiple conversations with people on the West Coast who didn’t know the U.P. existed.

Yet the assumedly universal impression that the Midwest kind of sucks contributes to Bohemia’s rural charm, which is defined by its inaccessibility, the prehistoric copper mines under it’s second lift (which have since been filled and covered, of course), its shameless inclusion of a handful of triple black diamonds, and its dedication to a simple, sustainable business plan complete with a couple base yurts, two lifts, no grooming, no snowmaking and only a handful of employees.

Yet in the online world of anonymity, the Michigan sentiment will continue to reign supreme, so long as this little mountain in Michigan continues to get the attention everyone thinks the East Coast deserves — “oh, how cute, Bohemia has 900 feet of vertical to our 7,000. I’m sure their ‘backcountry skiing’ is fantastic.” What most don’t realize is that where the Upper Peninsula is lacking in vertical, it more than makes up for in terrain, in its population’s commitment to simplicity, and ultimately in its humble attainment of an ever-dwindling commodity in the ski industry — soul.

And, at least for the past few months of the 2013/14, that includes some damn good pow days.