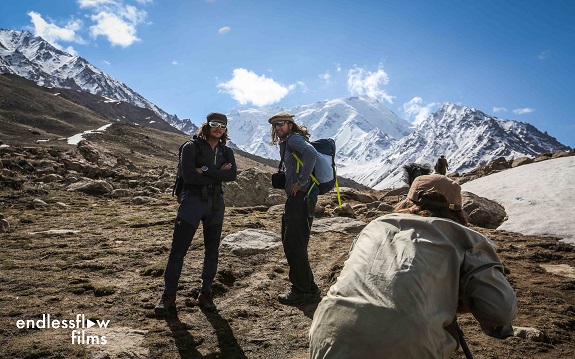 There are few professionals who can claim as adventurous a legacy as Ptor Spricenieks. He’s traveled the world, notched countless first descents, and seen cultures and countries to last lifetimes. “Dream Line” is a documentary about those journies and the power of the dreams that have motivated them. Revolving around a recent expedition to Pakistan with some of the world’s best big mountain skiers, “Dream Line” evokes archival footage, including some of the sport’s most legendary characters–Scot Schmidt, Reinhold Messner, Joe Vallone and Greg Hill, to name a few.

The film climaxes in Ptor and company’s attempt at Gashot Peak, a behemoth in the Himalayas of Pakistan, a culmination of a lifetime of dreams and proof that if you pursue a wish hard enough, anything can happen.

PRESS RELEASE: Bjarne Salen and Endlessflow Films proudly presents a new documentary film ‘Dream Line’. The 1 hour documentary explores the merging of the dreamworld with waking life, through the travels and ski adventures of mythical skier Ptor Spricenieks. Ptor’s quest of following his most heartfelt desires has created a life where his sleeping dreams have ‘crossed over’ and lead him onwards in the adventure of creating his reality.

Perspective is provided through the appearance of Scot Schmidt, Reinhold Messner, Joe Vallone and Greg Hill. Ptor’s ‘dream line’ finally takes him to the film’s climax on the pursuit of a remote, unclimbed peak amidst a unique cultural scenario in the Himalayan mountains of Pakistan. Dreamline is a ski and life adventure meant to connect with a very wide audience but is sure to captivate the mountain and ski crowd as Ptor’s skiing is brought forth from the shadows.