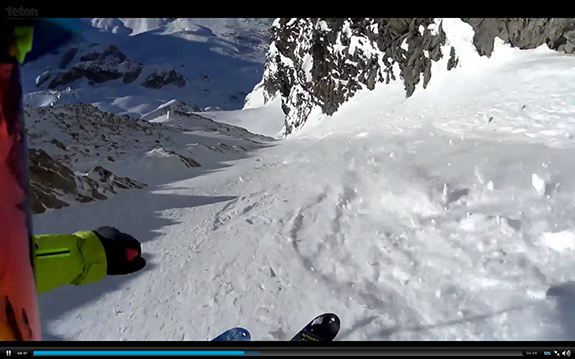 One of many treacherous chutes weaving their way through the monoliths of France’s La Grave region, extreme-ski legends Doug Coombs and Ptor Spricenieks first made their descent of “The Ice Line” in 2001. Inspired by their tenacity, Johnny Collinson, Ian McIntosh and guide Joey Vallone headed to La Grave to duplicate the feat for another episode of Teton Gravity Research’s Behind the Lens, plagued by variable conditions among some of the largest mountains in the world

During the episode, Ptor recounts his time spent with Coombs on their original 2001 mission. “I’m pretty sure it started with a conversation by radio. Doug and I were neighbors but we never used the phone. None the less, the time for ‘that’ line on the Glacier de la Meije was at hand…something we’d been looking at and scheming about together. As usual when that magic of timing and mutual inspiration come together, the mission is effortless. Too bad we were too busy flowing along to take pictures. The memories however, are super burned into my being. I remember how awed we both were to be in the middle of such a run. Despite Doug’s casual attitude towards things, he was the most awed that I had ever seen that day. ‘Full meal deal’ I think was his superlative. Thanks Doug.”