There’s a mythical claim that the Inuits have over 100 words for snow, but for the folks up at Island Lake Lodge near Fernie, BC, that number is closer to five. Of that number—and you can ask for yourself—approximately four are frantic versions of “mind-blowing powder.” Seriously, I’m only sort of kidding.

That’s because the iconic lodge and catskiing operation rest in the cradle of the Lizard Range, a spur of the Kootenays where cold Continental air collides with moisture-laden Pacific flow, creating a near-unending canvas of white. Consistent snowfall at high elevation provides a light, dry product across Island Lake’s 5,000 private acres of skiable terrain (part of a 7,000-acre tenure), giving even the most driven powderhound a week-long workout.

While the rest of North America suffered long bouts of high pressure and unseasonable warm spells this winter, Island Lake had enjoyed a conveyor built of winter storms. In the days leading up to The Ski Journal Week this March, the region had reported over two feet of the good stuff. 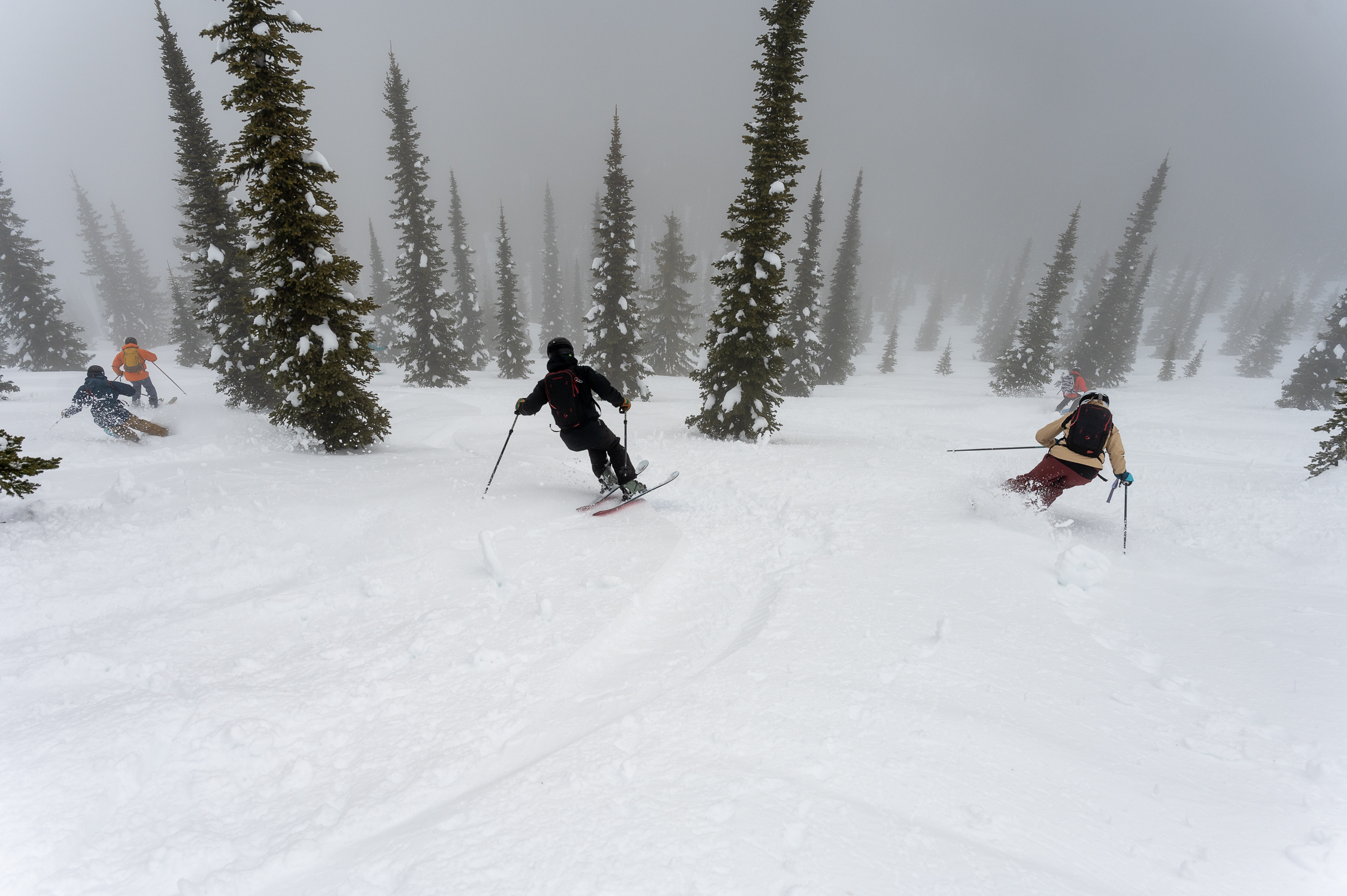 Misty morning party laps were just the first course on a diverse tasting menu at this year’s The Ski Journal Week 2022.

But this was 2022, two years into a reality that even Murphy might have a hard time wrapping his head around, where things go wrong—and then even wrong-er. As our group loaded snowcats, spring pulled back its misty veil. Temperatures rose as the crystal-blue skies grayed over, the jagged limestone of the Lizards suddenly lost to a base-eating blanket of wet clouds.

In a matter of hours, we went from powder dreams to praying for graupel, a word familiar to a bunch of skiers and boarders from south of the border, but nearly a foreign language in the Koots. Sensing the swift fall from grace, our guides Corrie Wright and Haley Wright assured us that some sugar on top could make for fast, fun skiing down the lunar landscapes below the Three Bears alpine, a zone full of pitchy rollovers, wind lips and open powder fields.

Then it rained—to the top.

When the skies cleared, the Lizard Range stole the show, one dramatic peak at a time.

Our hopes thoroughly saturated, we looked to our guides for, well, guidance. Corrie somehow seemed unperturbed. Over his 28 years working at Island Lake, “The Captain” had obviously seen way more than just five types of snow and knew this terrain like the back of his weather-worn hand. In fact, he’d created a chunk of it, traveling out with glading teams in the summer to trim the operation’s hero-spaced tree runs. Haley too, seemed relatively unbothered by the mess in the mountains. As a guide and avalanche forecaster for Avalanche Canada, she spent her work time and free time in these hills and seemed convinced that the range had an aspect worth skiing no matter which of the seven plagues headed our way next.

If there were any doubt Corrie’s singular mindset was scoring the best snow possible, it was lost when told us about his accidental wedding. Jonesing for snow a few years back, he convinced a cat driver to give him and his girlfriend a day of cat skiing by feigning, and then actually following through on, an impromptu wedding. The marriage was legit, but husband and wife choose to remember it as one their best ski days yet. 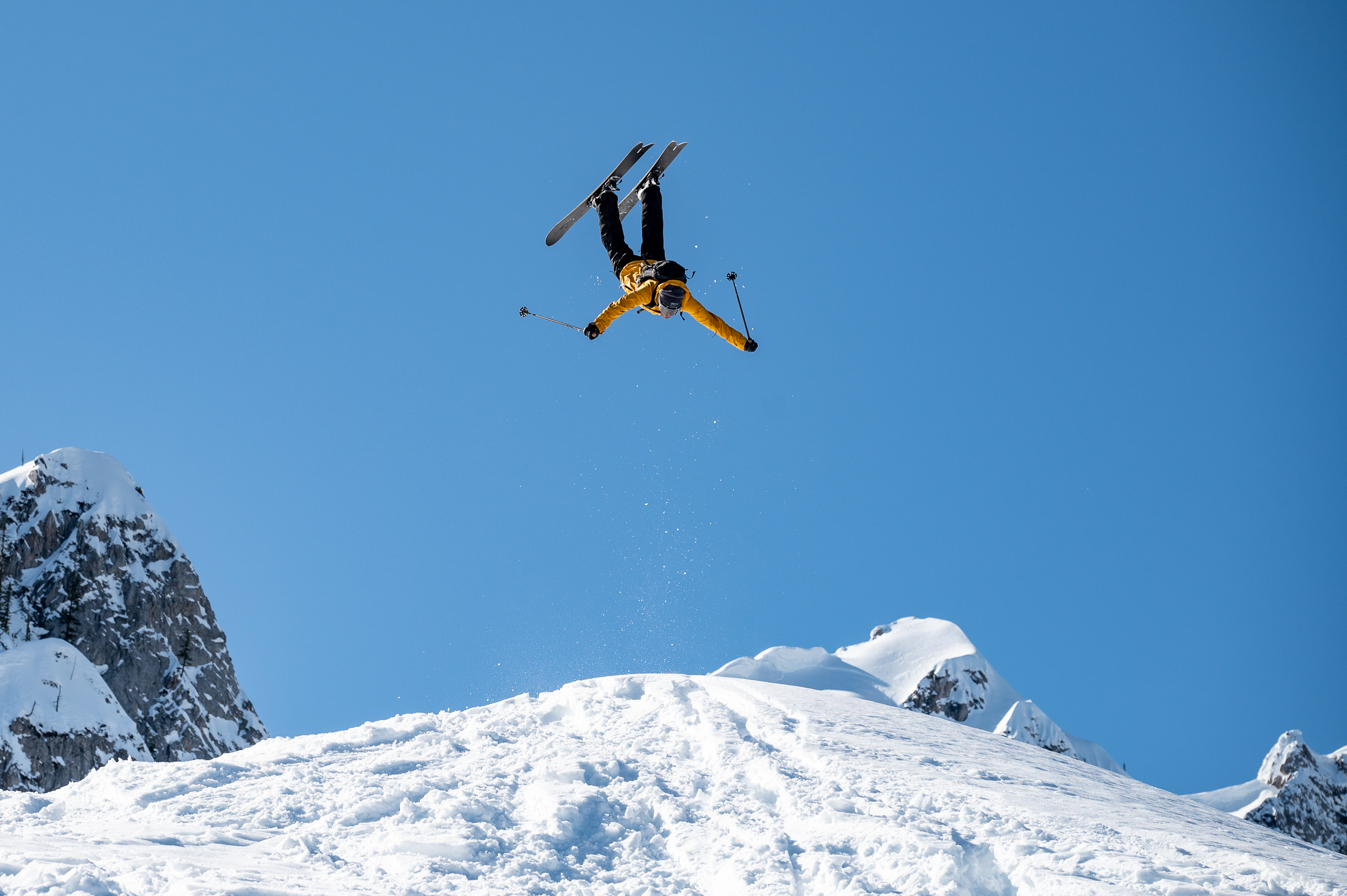 Looming large, Josh Malczyk lays one out in front of Mama Bear and Baby Bear peaks.

The next morning, the guides’ optimism burned off our cloud layer. With MH the cat driver steering us over the now-frozen landscape, Corrie and Haley laid out a plan. After an early morning coffee break with views of lines made famous by Scot Schmidt, Craig Kelly and the TGR camp, we headed towards the sun and a series of long tree runs plunging back toward the lodge below. By their estimation, the combo of rain, refreeze and solar affect mixed up the perfect recipe for a spring corn cycle.

Morning coffee, views and a little mid-mountain tomfoolery were all part of the daily rhythm north of the border.

Hesitant at first, we clicked into our skis and dropped off the frozen cat track one after the other. Two turns in, the icy chunder transformed into a velvety carpet. Carrying speed, we linked buttery turns through the pine forest, the only sound a chorus of yips from our shocked crew. There were no tree bombs and the snow never stuck—just 1,000 vertical feet of fast, sustained skiing. A weight lifted as we cruised our way downhill, replaced by the realization that even when the skiing should be bad, it can still be really, really good.

Different pokes for different folks. Side hits were prime thanks to sunny spring conditions.

At the bottom, we slid into a semi-circle, wide-eyed and buzzing. “Umm, that was weirdly awesome,” chimed a voice in the crowd. We each nodded, smiling and shaking our heads in disbelief. Across the way, Corrie shot a coy smirk back our direction. Silently motioning us toward the cat, he hopped into the front of the cab. Even with spring out in full force, there was still time for another run. 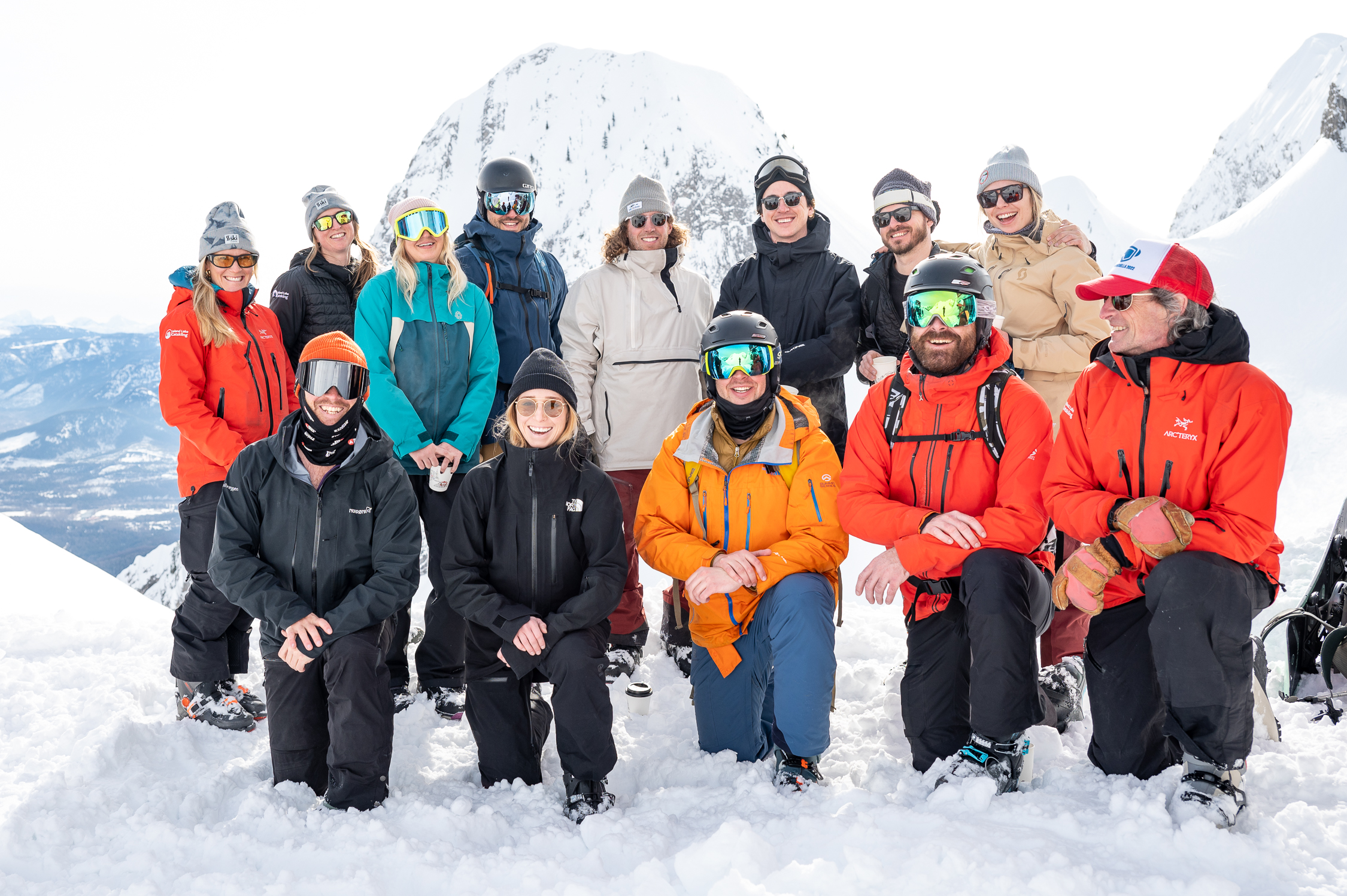 A special thanks to Kirsten Madsen, Corrie, Haley and the whole Island Lake Lodge team for an unforgettable trip. And to those who trekked north with us, thanks for bringing the energy, the good times and one heck of a playlist.