above The Adair family at the 2017 Outdoor Retailers Show where Zac, executive director of the National Center for Outdoor & Adventure Education, was a finalist for the Individual Outdoor Inspiration Award.

I am setting up fences around the magic carpets, so I don’t see the family come in, nor book a group lesson. Mom would have led the way, hand on her husband as they navigated through the stiles to the desk and on to the rental equipment area. The son, Sawyer, would have followed, giddy with anticipation. He’d be holding his dad’s hand, pulling him toward the base of the chairlift to meet the children’s school class I’m teaching.

That’s when I see the father’s orange vest.

I take Sawyer and the other 5-year-olds to the largest magic carpet. We practice turning through cones, and I remind Sawyer to press down on his big toes, like squishing a bug. Sawyer says skiing is like flying an airplane. Yesterday he couldn’t slow down, but today he is chairlift ready. He beams with pride and tells me his neon orange jacket matches his dad’s.

The story comes to me in fragments as we ride the chairs accessing Copper Mountain, CO’s easiest terrain. Sawyer doesn’t know dates past his birthday, or locations beyond his North Carolina home, or what his parents do for a living. He doesn’t know words such as “cornea”, “iris”, “pupil” or “retina.”

But he knows that before he was born, his dad was riding a bike. He thinks there might have been a traffic light, and a yellow car. And that the car hit his dad. And that there was metal and glass and blood.

Horror stories from my mom’s tenure as a nurse anesthetist in an eye hospital pop into my mind. It helps me imagine the face caked with gravel, a lacerated right eye that will have to be removed, and a left eye pierced by shards of glass, which will only ever see amoebas of shapes and splotches of color.

Riding above the beginner slope, Sawyer yells at a couple. The woman looks up and gasps. The man, in the orange vest emblazoned with “Blind Skier,” whips his head around, as if he moves quick enough he might catch a glimpse of his boy in the sky before it all blurs again. 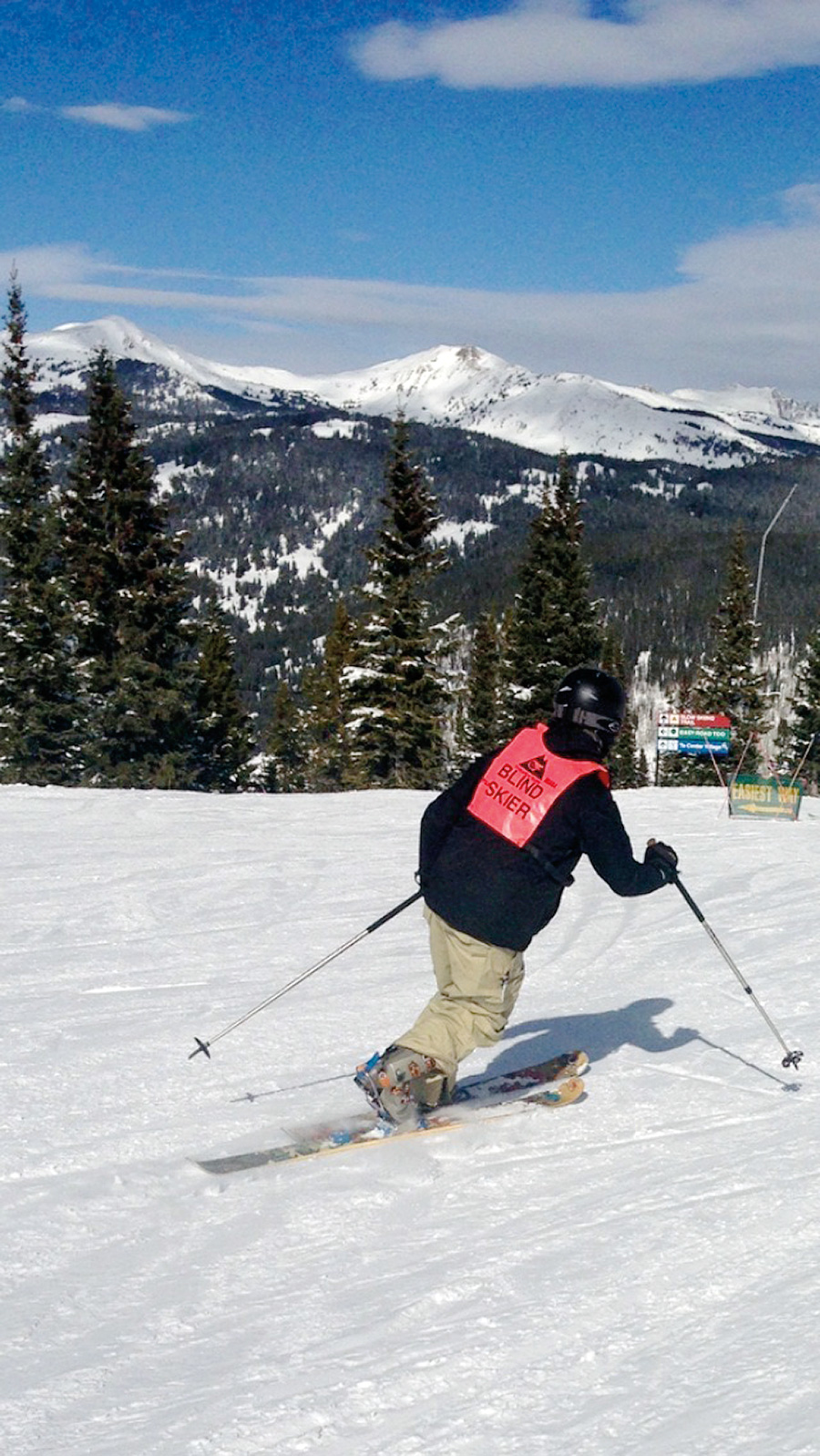 ABOVE Still in love with the sport even after he lost his vision, Zac Adair drops a knee at Copper Mountain Resort, CO.

Sawyer tells them to stay put and watch him, that he’s going to catch them. He turns and asks me if we can race this time. I say yes, and coach him through how to hold our hands out in front and make big snake turns until we catch Mom and Dad.

When I meet up with Sawyer’s parents at the end of the day, his dad, Zac, keeps his goggles on and aims them at the space slightly above my left ear. His mouth drops when I tell him Sawyer went down that easy green run four times, and on the last time, the time we raced, he only fell once. He is doing fantastic for his second day of skiing. “You can take him up the lift,” I say.

Through short, choked breaths, Zac tells me that when he heard Sawyer’s voice from the chairlift, it sounded like a bird. That, although he knows Sawyer’s pace, he sees a 5-year-old carving on 45-degree slopes, slashing turns in powder, spewing snow like waves at the beach.

This story originally appeared in The Ski Journal Volume 11 Issue 1.