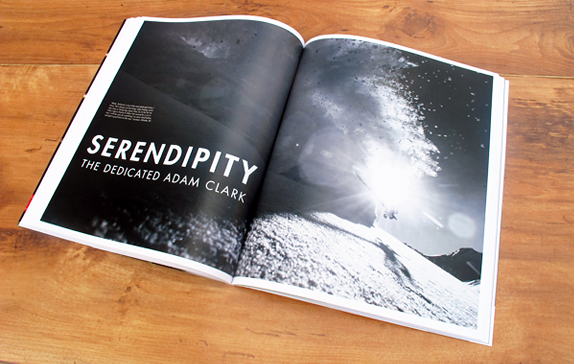 One of the sport’s most iconic—and hardworking—ski photographers, Adam Clark was gifted his first camera as a teenager. Since then, he’s shot with skiing’s greats, traveled the world and bumped into a moose. From his Utah home to Alaskan peaks, Clark’s perfect serendipity.
Words: Ingrid Backstrom

Two doctors, both amateur photographers on a whale-watching trip in Alaska, couldn’t help but notice the 17-year-old boy also on the boat, on vacation with his mother from Salt Lake City, UT; he spent the majority of the voyage barraging them with photography questions, from shutter speed to subject matter. Impressed with his interest and clever observations the doctors gave him one of their Canon A2E cameras at the end of the trip. Adam Clark took to that camera like a humpback to Alaskan waters, skipping school on powder days to shoot his buddies at Alta, UT, and—despite his new passion for the subject—barely passing his high school photography class. The teacher however, overlooked those absences in recognition of a precocious talent.

Upon graduation, he went to school in Montana for half a year, studying to become a cryptobiologist before the mountains—thanks to the wonders of his newly-discovered credit cards—beckoned him back. At 18 he was back in Alaska, this time shooting Wendy Fisher, Seth Morrison and Brad Holmes for Matchstick Productions. The trip was a bust for conditions but Adam saw his first photo published in Powder that year and ski photography has not been the same since…