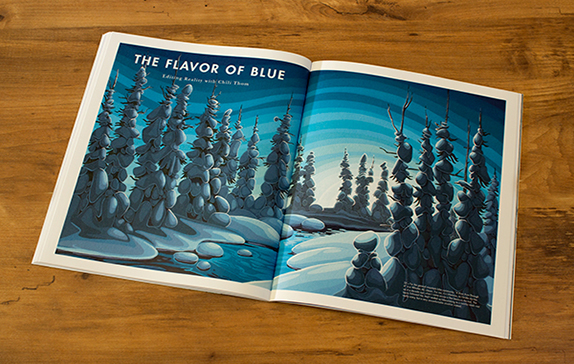 Chili Thom didn’t originally want to be an artist; he wanted to be a fighter pilot. But life led him into the British Columbia’s Coast Mountains instead, where he soon began painting what photographs failed to capture. From serving tables at Whistler’s Sushi Village to commissions from the Canadian government, Chili’s work now hangs around the globe—when he catches up on his waitlist, that is. Ice skating and editing reality with Chili Thom.

Any Canadian who can’t ice skate is flirting with treason, but it’s even weirder that Squamish-based artist Chili Thom lacks such a quintessential Great-White-Northern skill—he grew camping on isolated lakes and running around the wilds of British Columbia. This, however, was always a summer activity.

The northern Cascades, near his hometown of Chilliwack, BC, are impressive, but the community is a farming town that’s barely above sea level and rarely below freezing. Learning to skate would have meant spending countless hours in the local ice arena. Chili has never spent a lot of time indoors.