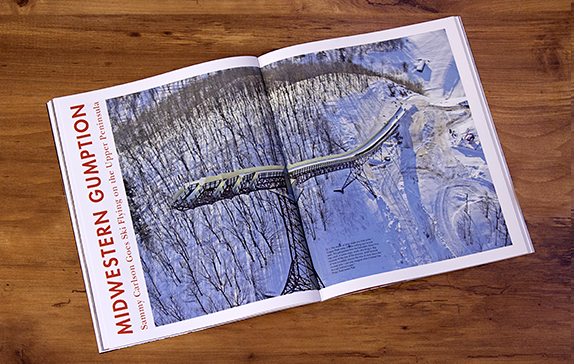 Rising 260 feet above northern Michigan’s Chippewa Hill, Copper Peak is the only ski-flying jump in the Western Hemisphere, with air time records stretching over 500 feet. However, due to financial woes and outdated infrastructure, Copper Peak hasn’t been hit since 1994—until Sammy Carlson arrived in 2014 ready to attempt an entirely different sort of record. Fear, 540s and ski flying on the Upper Peninsula.

Rising 26 stories from the hardwood forests of northern Michigan’s Gogebic Range, the now-dormant Copper Peak ski flying jump looks less like a record-holding setting and more like a 330-ton steel erector set or a scene from a high-budget sci-fi movie. The spire is bizarrely impressive and oddly intimidating, which is what drew professional skier Sammy Carlson there in the first place.

Completed in late 1969, Copper Peak’s massive jump is the largest—and only—ski flying facility in the Western Hemisphere. Named for its mineral deposits (during the ski hill’s construction, a 140-pound copper nugget was discovered near the present-day judge’s stand), Copper Peak is located on Michigan’s Upper Peninsula, along the shores of Lake Superior. The rock outcrop the jump is built on, also known locally as Chippewa Hill, can claim 364-feet of vertical; the jump itself towers an additional 260 feet, including a 469-foot long, 35-degree in-run. After an 18-story elevator ride and an eight-story hike up a twisting staircase to the tiny platform at the summit, jumpers have a commanding view of the Black River Valley, the distant Porcupine Mountains, and the Canadian shores of Thunder Bay, 85 miles away.