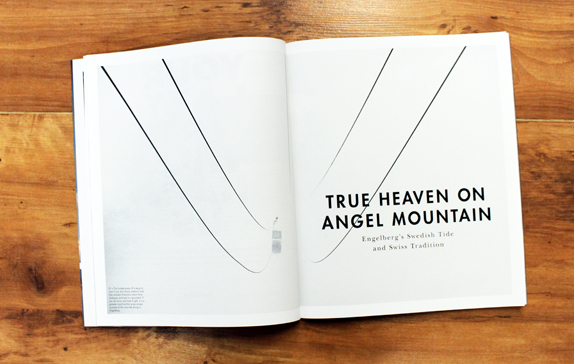 Located high in the central Swiss Alps, Engelberg, or “Angel Mountain,” is a hamlet bristling with stereotypical Swiss icons; it’s also an orographic anomaly, attracting snowfalls as deep as its 100-plus-year skiing history. Home to the first rotating aerial tramway, a 900-year-old monastery, and a cozy beacon of Swiss tradition, modern Engelberg is attracting a new wave of skiers looking to escape the insanity of the modern world and find a little heaven in the process. Collective decades of deep-powder experiences at Angel Mountain.

There was no new snow in Switzerland. Three weeks of sun and warm föhn winds had preceded our arrival, and social-media reports offered a far grimmer analysis than a make-the-best-of-it missive exhorting us to “bring sunglasses.” Still, it hadn’t stopped our international film crew from forsaking the snowier environs of Whistler, Squaw Valley, Alta, Åre and Oslo to rendezvous in Zurich for a long-planned Switzerland shoot. Now the question was: where to go?

With clouds suddenly materializing on an otherwise blue horizon, and this nation of cheesemakers, watchmongers and überbankers gazing skyward in anticipation, the forecast, unfortunately, proved underwhelming. Most ski areas, it held, would receive but a dusting—maybe just under an inch. We’d had a hunch, however, and called some friends in Engelberg: Were they maybe expecting higher amounts? “Of course,” they replied, “perhaps three feet.”