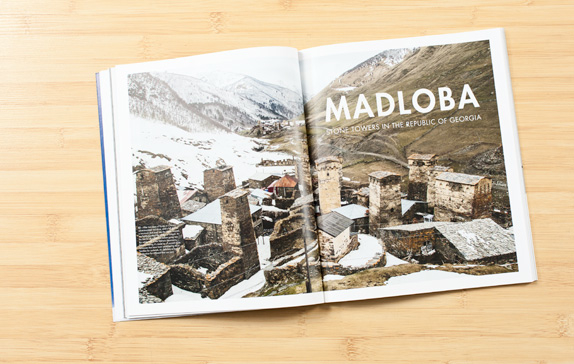 In 2008, a crew of ski mountaineers traveled to Georgia’s Svaneti Region, a UNESCO World Heritage site at the edge of the Shkhara Mountains. Defeated on that trip, the group returned seven years later to make another attempt at the beast of Mount Shkhara, the region’s crown jewel. Through ancient stone towers, endangered languages and the scars of war, they discover that in a world built around survival success doesn’t always equal victory.

A steady flow of snow and ice runs by, forming runnels on each side of the small ledge we have chopped from the slope. The perch is about the size of a queen bed, and at 16,000 feet it affords an expansive view over the Shkhara Glacier and the small village of Ushguli, from where we had set out nine days prior. Standing shoulder to shoulder, comfortable and warm thanks to the shielding of the rock outcropping above us, we watch as the sun releases more rime and warms the slope around us.

Seven years earlier I had stood below this same outcropping. In 2008, Tyler Jones, Seth Waterfall and myself had been drawn to this remote region of the Republic of Georgia by a stunning couloir off the 17,480-foot Mt. Shkhara. We had come up several hundred feet shy of a ski descent from the summit, and—as any ski mountaineer would—we wanted to return to slay the beast. I just never expected it would take so long…