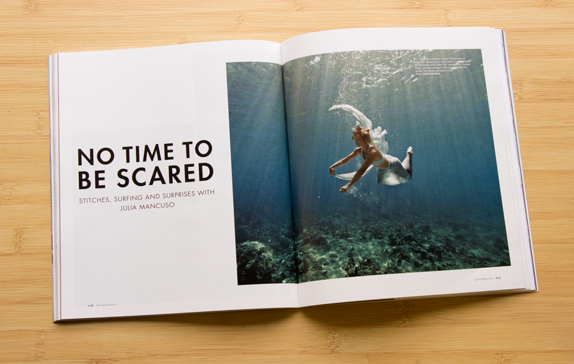 Earning multiple gold medals, conquering monster-sized waves and barreling down icy slopes in excess of 60 mph would leave anyone a little beat up. But after a chaotic childhood that included FBI drug busts, a career filled with injuries and media-fueled rivalries—plus three Olympic Games—Julia Mancuso has seen more than her share of stitches and bruises. But that doesn’t mean she’s out of the game; Mancuso is still full of surprises.

Julia Mancuso pulls off her black and white cap and digs through her thick brown and blonde-streaked hair. In a part, near the crest of the back of her skull, she reveals a thin white horizontal scar about two inches long. In early 2015, a wave she was surfing in Fiji flipped her upside down. Her head connected with the reef, requiring a bloody staple job to reconnect her scalp.

We’re at Granite Chief, a ski shop in Truckee, CA. It’s late August and Julia is having her bright-blue Lange boots ground down by ski tech Gunner Wolf for an upcoming trip to Chile. She’s about to start her 16th World Cup season. In the next few years, she hopes to complete and medal in her fourth and final Olympics—something few athletes have ever done.

But at 31, the Wonder Woman who once wore a tiara to the podium is kind of beat up. She’s spent close to half her life zig-zagging the globe, speeding through gates with the world’s best. She’s taken heinous, cart-wheeling falls, careening through fences. She’s been figuratively slapped by rivals and commentators. She’s cried over defeats and struggled in long-distance relationships. She’s had stitches and surgeries and physical therapy. Her latest, another surgery on her hip, has kept her off snow for close to six months…