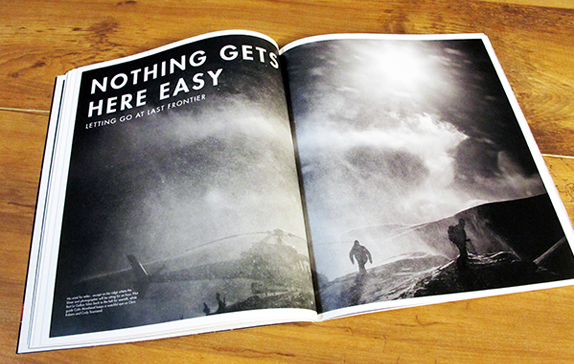 At nearly 3,700 square miles, British Columbia’s Last Frontier Heliskiing can claim the largest single expanse of heli-skiing tenure in the world. It is also one of the most remote operations in the business, with supplies traveling hundreds of icy, pot-holed miles. At Last Frontier, nothing may get here easy, but it’s worth the nirvana of the never-ending line.

Spindrift cascades from the col, whipped high by the wind. Calm behind his razor-black shades, Bert Le Gallais manhandles the bird as we drop sudden and hard into chop of an alpine amphitheatre, thousands of feet above the fractured glacier below. The black walls are streaked with ice; I watch a block tumble into the void. Cody Townsend, his lip packed with Swedish snus, points out potential zones while Chris Rubens, the day’s grizzle already meeting his unruly locks, nods his head in agreement. The rest of the crew—photographer Bryn Hughes and videographer Jeff Thomas—join along in the pantomime. They pick out lines with precision and purpose; we have a Salomon Freeski TV webisode to shoot.

Bert, his mouth tight, swings around for our third attempt. It is a clear day. The alpine sun reveals a white-capped horizon—jagged peaks jut from a limitless ocean of ice. We are a mere 10-minute ride from Last Frontier’s Bell 2 Lodge, about 220 miles northwest of Smithers, BC, and have only tapped into a fraction of the terrain. Last Frontier’s tenure is so vast that it straddles both the Coast and Skeena mountain ranges, from Mount Ediza and Spatsizi Plateau Provincial Parks to the north, to the Alaskan border to the west, and the little towns of Stewart and Hyder to the south—at nearly 3,700 square miles, the largest single expanse of heli-skiing tenure in the world…