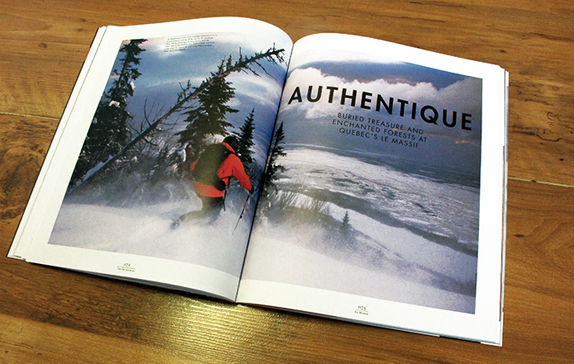 Boasting the highest vertical rise east of the Rockies and the deepest annual snowfall in the East, Quebec’s Le Massif isn’t a fairytale. But that doesn’t mean the East Coast’s most unorthodox resort—owned by a Cirque de Soleil cofounder, surrounded by a forest strung with syrup IVs, and infiltrated by an outlaw fraternity—has any less magic.
Words: Leslie Anthony

Le Massif was a fable spun in East-coast lift lines among telemarkers of the 1980s. Even with the right pitch to ski the rumored abundance of snow, and over 2,300 feet of steep fall-line skiing, it was hard to visualize the western-style heli-runs claimed by hardcore acolytes. As a neophyte Toronto-based ski journalist in 1989, however, I was invited on a press trip to Le Massif. Experiencing Massif magic in a 22-inch St. Patrick’s Day dump with my frequent photo collaborator, Henry Georgi, was as close to realizing a dream as any eastern skier could hope. No one had lied or exaggerated—it was catskiing without the cat. And though that situation would change through my many trips to Le Massif over the years, the magic would remain intact…