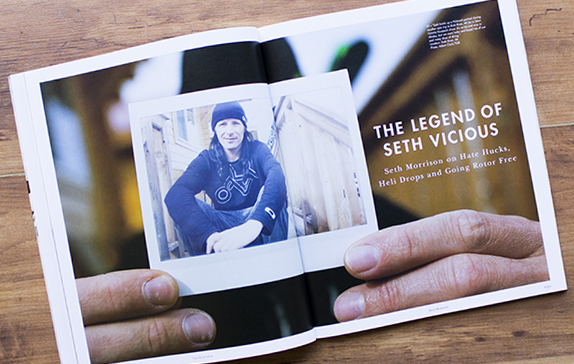 There are few faces as well-known in skiing as Seth Morrison’s. With his dyed hair and eyebrow piercing above a quietly intense countenance, the infamously-punkish Morrison has been stunning audiences and pushing the limits of big-mountain freeskiing for over two decades. Now nearing 40 and an indisputable icon, Morrison is making the move from heli-assisted hucking to crampons and rappels. Smarter, wiser, more selective and continuing to grow his legacy—the Incredible Seth Morrison.

Seth Morrison’s face is badly scuffed. A scar traces below his nose. Red lines drip from his battered forehead. Onlookers would urge him to seek medical attention, were this Seth Morrison face situated on Seth Morrison’s head. Instead, the face in question is stitched on my ski backpack, the Seth Morrison pro model Black Diamond Bandit. When I ply a skin track with this pack, Seth Morrison’s punky countenance looks back at the skiers behind me…on those extremely rare occasions when skiers are behind me. I suppose this happens in lift lines, though.

Seth Morrison’s face—well, a stylized depiction of it—also appears on K2 skis. That’s at least understandable: Ski topsheets take well to all kinds of graphics, including faces. For example, Seth’s mug when he appeared to puke razor blades on his 2008 pro model K2 Seth Vicious boards.

But it’s much rarer to have one’s face printed on pliable nylon. Only icons enjoy such a privilege. As proved by my backpack—as well as signature sponsorships with Oakley, Full Tilt, Troy Lee, Hestra and K2—Morrison is indisputably an icon. When it comes to skiing, Seth belongs in the upper echelon of the upper echelon…