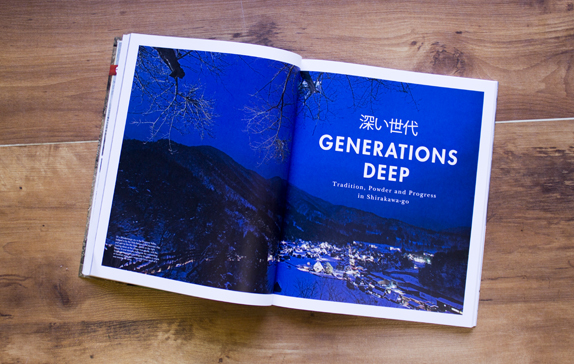 The tiny village of Shirakawa-go, located high in the Hida Range of the Japanese Alps, has a history that stretches back centuries—one deep enough to earn a UNESCO World Heritage Site designation. But under the thatch roofs of 200-plus-year-old ghasso-style houses lives a culture shaped by some of the country’s largest snowfalls and a reverence for the mountains, one that—despite onslaughts from the outside world—continues into modern generations. Tradition, preservation and exploration in Shirakawa-go.

An old women sits in a darkened room, walls blackened by decades of smoke. She plucks at a traditional shamisen guitar. Standing taller than her, it echoes beautifully through the wooden room. Her back is stooped from years of working the fields, and her eyes are barely visible through the wrinkles covering her face. Still her smile is unrelenting, and her soothing songs fill the air.

She is the matriarch of the family that has inhabited this house for four generations. Dozens hand-carved instruments hang from the walls, mingling with yellowed, decades-old photos of the village. Some show dozens of neighbors swarming a single house, helping build the three-foot-thick roof of locally grown miscanthus grasses. The process would take one family nearly two months to finish; it takes the collective village a day.

That roof may only be a few decades old, but the building itself—a traditional gasshō-zukuri-style house (translated “prayer hands”), a thatch-covered, steeple-steep A-frame—was built hundreds of years ago. It is one of the nearly 2,000 that once comprised the small mountain village of Shirakawa-go, nestled deep in the Japanese Alps of the Gifu Prefecture on the island of Honshu…