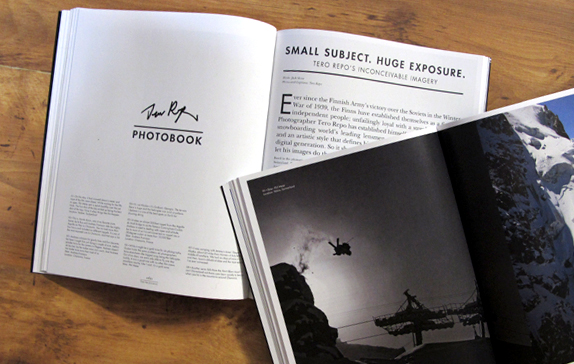 Finnish photographer Tero repo has carved out a niche in ski and snowboard photography as a big mountain documentarian. After a year in Finland’s army, he moved to Verbier, Switzerland and has never looked back. Explore the stunning mountainscapes and big line imagery of Tero Repo.

Ever since the Finnish Army’s victory over the Soviets in the “Winter War” of 1939, the Finns have established themselves as a fiercely independent people; unfailingly loyal with a streak of stoicism. Photographer Tero Repo has established himself as one of the ski and snowboarding world’s leading lensmen, with commercial contracts and an artistic style that defines his shots and sets him apart from the digital generation. So it should come as no surprise that he prefers to let his images do the talking.

Based in the photographer-heavy Val de Bagnes (home of Verbier), Switzerland, Repo is raising a multi-national family with his Swiss / Aussie wife and two kids. A passport full of stamps from chasing big-mountain hellman Xavier de le Rue around the globe, Repo is on the run six months a year. When he’s at home, he keeps busy with the family, tries to learn to fly a photo drone r/c helicopter, and drinks beer—occasionally the non-alcoholic variety, just to mix it up…

Subscribe to get your own copy of The Ski Journal.