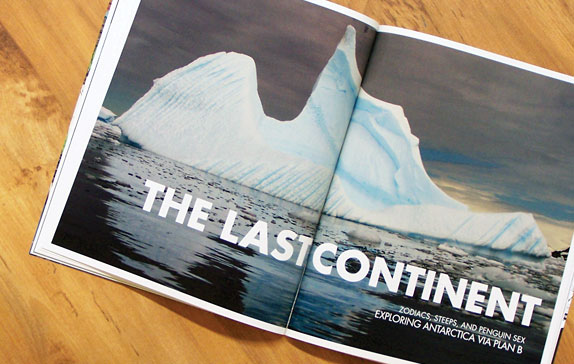 When an Antarctic ski-touring voyage is cancelled due to last-minute mechanical issues, a group of stubborn skiers hitch a ride on a tourist cruise and ski what they can—which turns out to be 50-degree chutes amongst penguin rookeries and more.

The last thing you want to hear after venturing from above the Arctic Circle in Alaska to the southern tip of Patagonia, with all your ski gear in tow, is that your planned voyage to Antarctica has been cancelled due to a broken boat.

A broken boat? Seriously? This was tough news to digest, in part because I’d just awoken with a serious seasickness-medication hangover. Twelve hours earlier we had boarded the vessel Lyuobov Orlova in the seaport town of Ushuaia, Argentina, the world’s southernmost city, and went berserk on what was to be our floating home for the next two weeks. We ran excitedly through the corridors like little kids, posing on the bow (“Look Jack, I’m flying!”), and exploring all the ship had to offer…