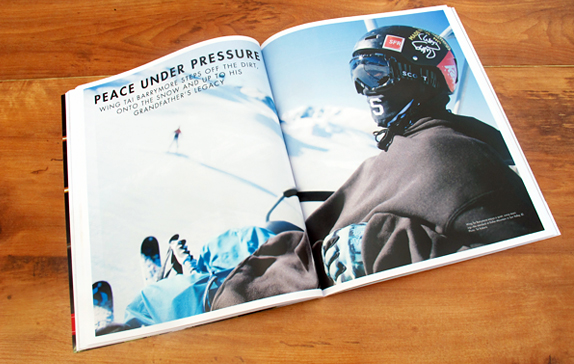 Son of Ted Shred and grandson of filmmaker Dick Barrymore, in a mere four years Wing Tai Barrymore shot from obscurity to halfpipe podiums and Olympic dreams. And the former-motocross world champion is determined to continue the family legacy.
Words: Sakeus Bankson

Wing Tai Barrymore was not much of a skier four years ago, despite being the grandson of Dick Barrymore, one of history’s greatest ski cinematographers. He’d had the standard Sun Valley, ID youth—his dad put him on skis at age two and he’d spent regular time on the hill every winter since—but his passion was dirt biking. He spent all his free time racing motocross, earning spots at the top of the pack for his age group and claiming podiums across the country. At 16, he was offered a factory sponsorship from KTM, meaning he would be trading high school for home school, moving to California, starting a performance diet and a workout program—full-on pro status.

Then, burnt out on the seriousness of the race circuit, Wing Tai decided to be a skier. He couldn’t do a 360, and had never had any serious passion for skiing. But he wanted to try something new and, being a Barrymore, it was the natural path. He dropped out of motocross, bought a pair of Scott skis, and, completely unknown in the ski world past his last name, headed toward the halfpipe. His first and second years he won Junior Olympics; his third he earned a wildcard into the Euro X-Games and qualified for finals for the World Skiing Invitational in Whistler. Four years later he won the Grand Prix, made it to the X-Games and earned a spot on the US Ski Team, meaning he had a chance to attend the 2014 Olympics beside names like Simon Dumont, Sammy Carlson and Tom Wallisch..Subscribe to start your collection of The Ski Journal.