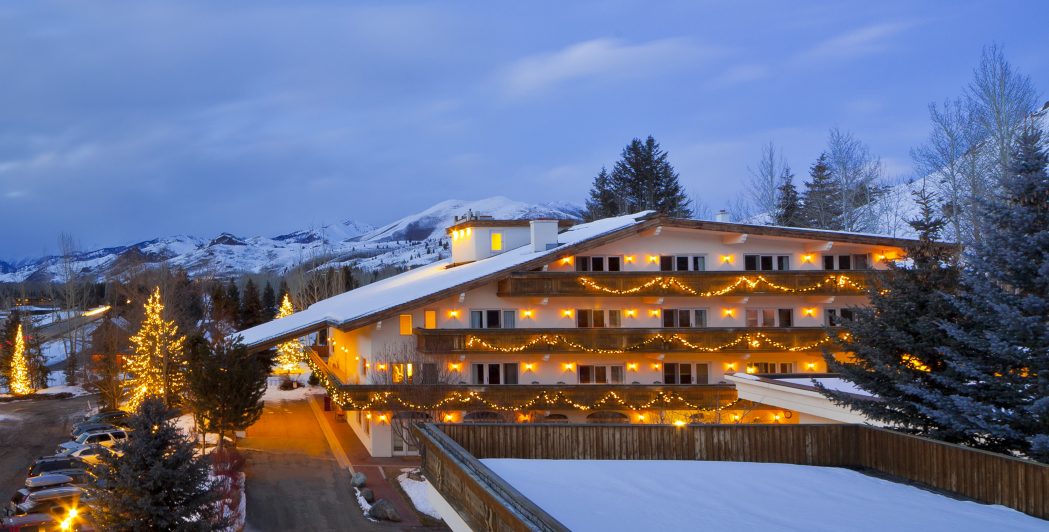 Cozy and uncomplicated—Knob Hill Inn lit up with the Pioneer Mountains as a backdrop. Photo courtesy of Knob Hill Inn

The last ski trip I went on, I slept curled in a ball on the bench seat in my friend’s truck camper. We ate pasta for every meal in which it was acceptable to eat pasta, and oatmeal the rest of the time. We dried our gear in a two-foot-wide storage “closet” that apparently doubled as a bathroom—if it weren’t filled to the brim with Gore-Tex and sweaty ski boots and pools of water from our wet gear.

This is important to note for only one reason—so that you might understand how slightly out of place I felt on my first trip to Sun Valley, ID. Exhibit A: When I arrived at Knob Hill Inn (in Ketchum, ID) for a weekend ski trip in December, I was almost immediately greeted with a king-sized bed, a glass of merlot and a grilled rainbow trout that was likely caught no more than a hundred or so miles from where I was sitting.

This ain’t no soggy camper and pasta for dinner scenario.

I flew into Sun Valley on a sunny Thursday—this seemed appropriate, given the namesake of my destination, but rest assured that it’s always strange to see blue skies in Seattle in December. I’m immediately greeted by Steve, a shuttle driver for Knob Hill Inn, in baggage claim after a spectacularly clear flight; in just under two hours, I was afforded views of Mt. Baker, Rainier and the Cascades, as well as the vast expanse of national forests and endless mountain ranges north of Boise. Steve is a tall, grey-haired guy with glasses, scruff and a ski racing background. On the drive, we share ski stories and he talks about how he ended up in this rugged valley stretching out of the foothills east of Boise. He shares a great impression of the enthusiastic Austrian race coaches he worked alongside as a ski coach in Europe in the 90s while occasionally offering important notes on the towns and landmarks we pass en-route to Ketchum.

Soon, we approach Knob Hill Inn, which is barely visible off the road, its humble exterior shrouded by blue spruce and a dusting of snow. Pulling up to its entrance, it feels very much independent of the bustling grandeur of the downtown area, where aging brick buildings and old cowboy saloons coalesce with trendy boutiques housed in modern structures. Entering the lobby, I discover a level of coziness that borders on cliche: a stone fireplace crackles under a mantle filled with Christmas decorations and candles and the dining area, replete with leather chairs and a Christmas tree, is softly lit with views of the sun setting over the Pioneer Mountains through the front windows. 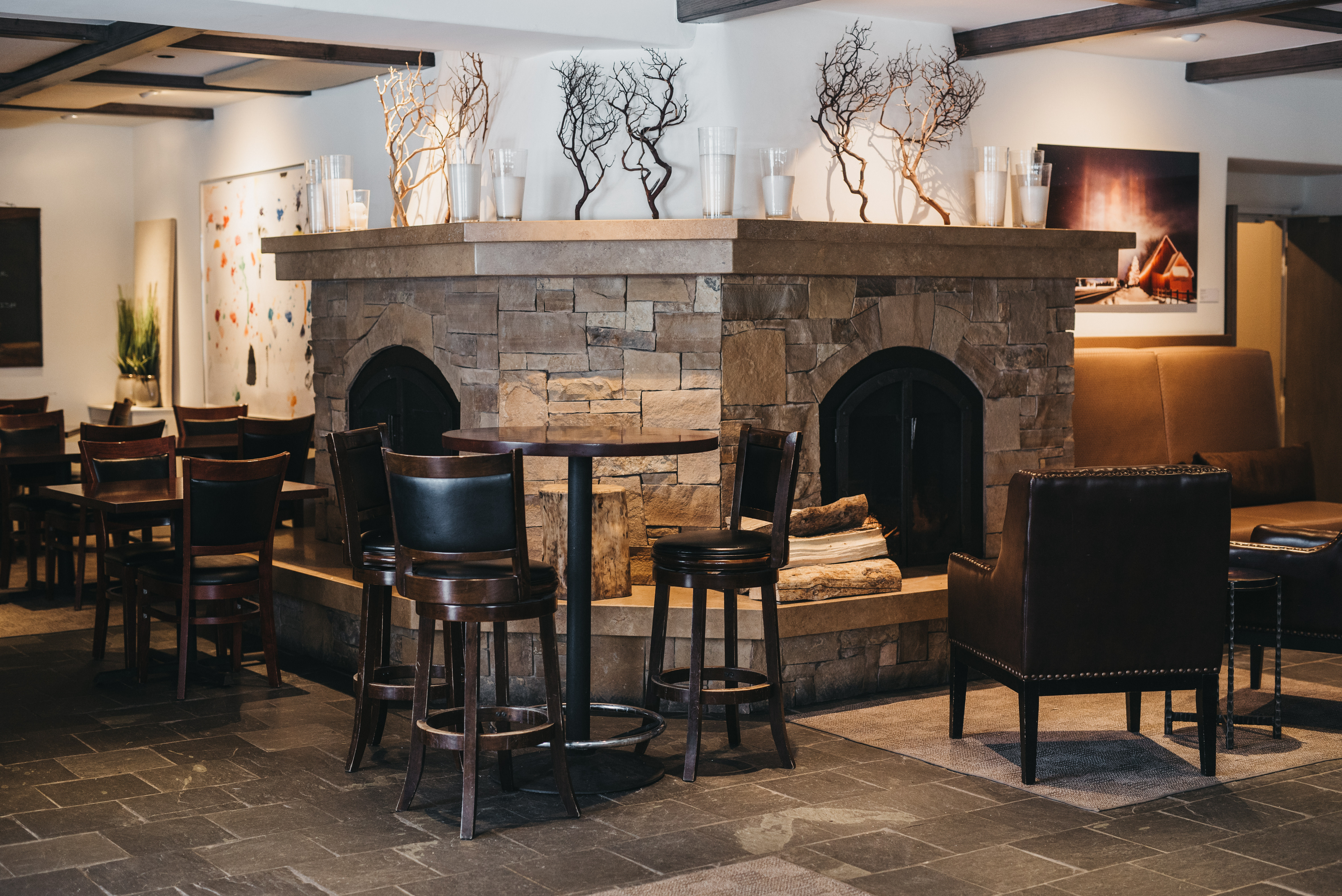 I’d never been to Sun Valley before this trip because I’d always deemed it too far away or too outside of my budget (which I like to think hovers just above ‘ski bum’ but just below ‘someone who can afford rent in a mountain town’). But I found that Ketchum—while maybe a bit heavy on bathrooms lined with granite and gold—manages to strike a good balance between the opulence it’s known for and the culture it’s developed despite it. Not just that, it’s well-stocked in everything I appreciate in a mountain town: blue ribbon trout streams running through sage-covered mountains, great backcountry access (and huts) in the Sawtooths, and a historical backdrop that doesn’t start and end with the ski resort.

This luxury-culture balance seemed especially personified by Knob Hill, which felt fancy but also very approachable and welcoming to someone who regularly sleeps in her car.

Inside Knob Hill, and just beyond the lobby is The Grill, which is their in-house restaurant that happens to be everyone I speak to’s favorite food spot in town. I decide to check it out on my first night there, and note how comfortable and nearly packed it is for a Thursday night. My waiter is a local skier named Jordan, who recommends the rainbow trout (twist my arm) and has a distinct ability to make the older couple at the table next to me roll with laughter. When he comes back with my trout, he lets me know that the Warm Springs side of the mountain will open the next day, suggesting that I check it out early for soft turns on fresh groomers. The resort is still only about 20% open—it’s only early December, and Mother Nature hasn’t quite delivered on the snow front, yet. Tomorrow will be my first day on skis this season, so I head to bed early, displaying the same fervor to ski man-made groomers as I’d normally have the night before a powder day. The next morning, I cruise steep, fall-line groomers through the mist and hum of snow guns until my early-season legs reach jello status. 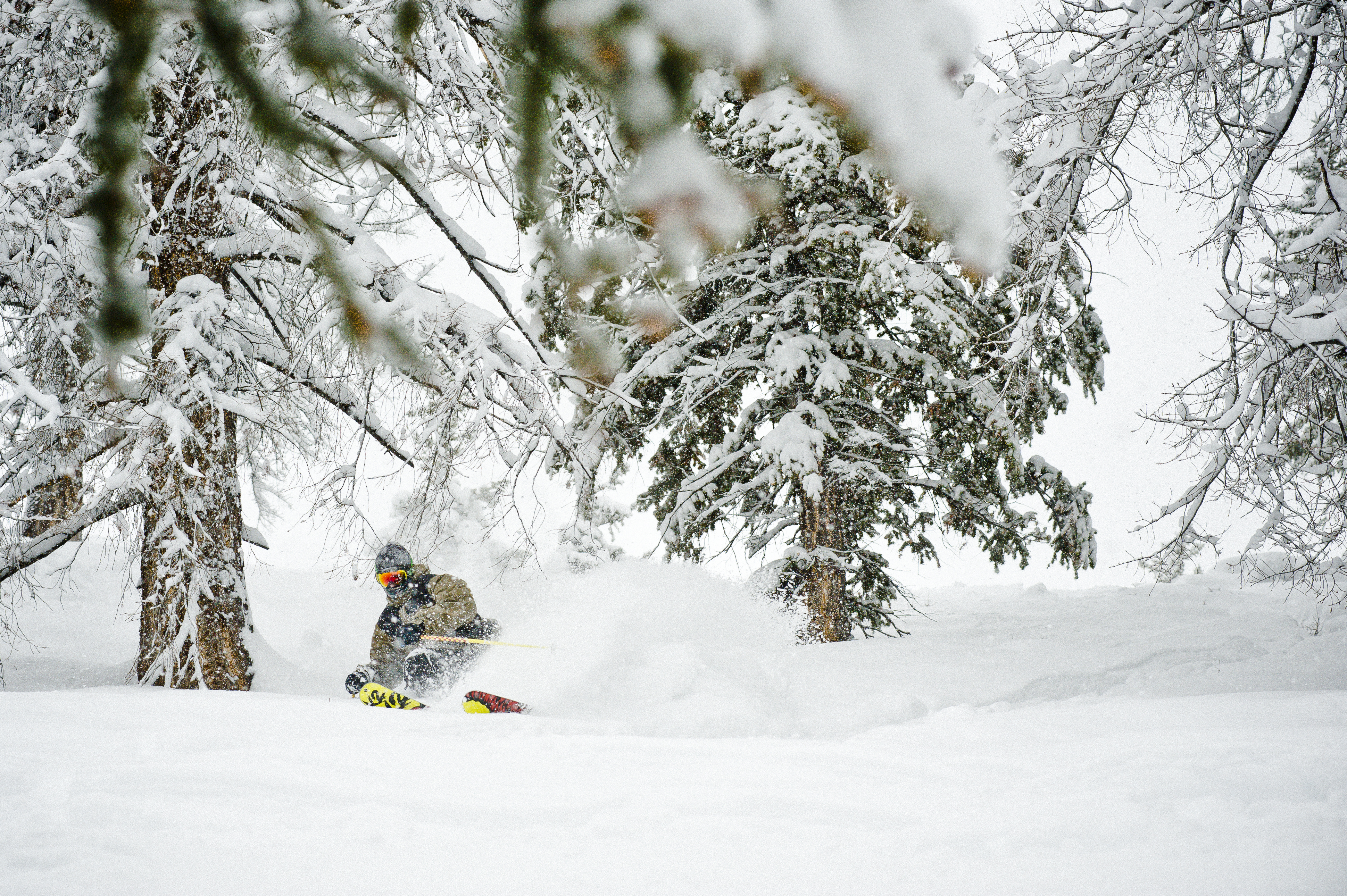 above Ketchum local Collin Collins in the trees in the Sun Valley backcountry.
Photo courtesy of Visit Sun Valley

That night, I get back to Knob Hill with the singular goal of sitting in the hot tub until I get pruney followed by a few minutes in the sauna. Upon succeeding in both of these objectives, I go to bed early for another day of waking up too early to go too fast on the ribbons of man-made groomers winding downhill from Bald Mountain. I lay down, wrapped in down on a mattress that probably cost more than my car, and revel—once again and however briefly—in that little bit of luxury I’d been missing.

Rooms at Knob Hill run around $180-$700 a night, depending on what you want and whether or not it’s a holiday or weekend. If you’re in the Pacific Northwest, check out Alaska Airlines for affordable tickets from Seattle (usually in the $225-$300 range, roundtrip).

For more information about Knob Hill Inn, check out their website.